The Irish Times view on British Labour: a battle for the party’s future 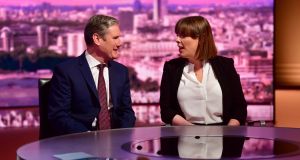 Last month Britain’s Labour Party suffered its worst electoral defeat since the 1930s, losing 60 seats and handing the Conservatives a majority that should see them comfortably through a five-year term. This was the fourth general election in a row lost by Labour; by 2024 it will have been out of office for 14 years.

Following the latest defeat, Jeremy Corbyn announced that he would stand down. The procedures and timetable for choosing his replacement have now been clarified, with a new leader to be in place by April. There is likely to be a fairly wide field.

Salford MP Rebecca Long-Bailey, seen as a Corbynite, emerged as an early favourite on the basis of the significant influence which supporters of Corbyn and members of the Momentum group still wield inside Labour, and particularly in its ruling body, the National Executive Committee. But shadow Brexit secretary Keir Starmer appeared in polling to be more popular with members. Two further runners, Jess Phillips and Lisa Nandy, both critical of Corbyn’s leadership record, and, also significantly, both women and from outside London, declared at the weekend.

Media hostility to Labour, however, has been a constant of British politics for decades and is something that the party simply has to find ways of dealing with

As the scale of Labour’s defeat began to sink in last month, Jeremy Corbyn expressed sadness at the outcome and sympathy for defeated MPs, but he still insisted that his party had “won the argument”. He also expressed continuing pride in the manifesto on which it had fought, a blueprint for radical change that many voters seemed to have had great difficulty believing in.

Supporters of Corbyn tend to blame Labour’s defeat on two factors: intense media hostility to the party and its leader, and the persistence of Brexit as an issue. Media hostility to Labour, however, has been a constant of British politics for decades and is something that the party simply has to find ways of dealing with.

Meanwhile, the party itself, through its policy confusion and lack of courage on Brexit, made itself vulnerable on an issue that should have been one of its strengths. While Brexit will continue to be the major issue facing the UK in the coming year, the strength of the Conservative mandate and the expectation that the country will formally leave the EU on January 31st should take some of the party-political heat out of the issue at Westminster.

The choice facing Labour seems to be between what has been called “the continuity option” – entrusting the party to those who, believing that the people got it wrong in 2019, want to reheat the same dish for 2024 and a new leadership that will seek to re-establish Labour as a “broad church” and take on the huge task of regaining the trust of the millions of voters who have recently deserted it. For the health of British democracy, as well as for the sake of those who want to live in a fairer, more equal society, it is to be hoped that the second option will be chosen.