The Irish Times view on the year ahead: Democracy put to the test 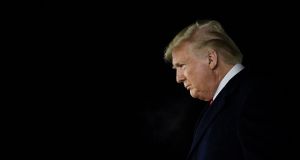 In the US, Donald Trump will go on trial before the Senate and will almost certainly be acquitted of very grave and well-founded charges. Photograph: Brendan Smialowski/AFP via Getty Images

In some respects, 2020 is an unusually predictable year. The United Kingdom will leave the European Union on January 31st. There will be a general election in Ireland in the early months of the year and, in the North, the devolved political institutions will either be renewed and stabilised or face definitive collapse.

In the United States, Donald Trump will go on trial before the Senate and will almost certainly be acquitted of very grave and well-founded charges. The contest within the Democratic Party will become much more focused after the Super Tuesday primaries in California, Texas and other states on March 3rd. The process will produce a challenger to take on Trump in a presidential election in November that will leave its mark on world politics for a generation. There will be some welcome distraction in the form of the Euro 2020 football tournament and the summer Olympics in Tokyo.

And the Earth will continue to burn: there is little doubt that 2020 will be one of the hottest years on record. By the time the United Nations climate change summit takes place in Glasgow in November, we will be almost another year closer to irreversible damage to the natural systems on which human life depends.

It is somewhat ironic that, most probably in July, Nasa will launch the Mars 2020 rover. Its mission will be, in part, to determine whether Mars was once habitable for organic life forms before they were killed off by drastic climatic and atmospheric changes. If similar questions are not to be asked about Earth, the new year will have to be a much more decisive one than its predecessor.

A win for Trump will be a terrible signal that the tide of reaction is still coming in. His defeat will be a victory for democracy and survival

The great dilemma of our time is that, on the one hand, the climate crisis cannot be tackled without rational, stable governments committed to joint action through global institutions and agreements. Yet, on the other hand, the big political shifts of our time have been towards unstable and irrational governments mobilising narrow and divisive forms of ethnic nationalism, isolationism and exceptionalism.

On the positive side, the “green deal” put forward by the incoming European Commission to make Europe the “world’s first climate-neutral continent by 2050” is a serious response to the crisis. But it is vital that it is backed in 2020, not just through the EU’s collective efforts and resources but through urgent action by member states themselves. Ireland, a shameful laggard on climate change, needs to transform itself into what it pretends to be: a global leader in confronting the crisis.

It is the climate crisis, more than any other single issue, that gives the US elections an epochal importance. Trump has been a malign presence in so many ways, but his most outrageous transgression of decency has been his withdrawal of the US from the Paris climate accord. In the long run – if there is one – 2020 will be seen as the year in which the world’s biggest economy, and worst carbon polluter, either embraced its basic responsibilities to humanity or turned decisively towards denial and destruction.

A win for Trump will be a terrible signal that the tide of reaction is still coming in. His defeat will be a victory for democracy and survival.

It is also the climate crisis that exposes just what a tragic waste of time and energy Brexit really is. Boris Johnson will have his moment of triumph at the end of January and there will no doubt be fireworks and starbursts of hyperinflated rhetoric about freedom. But the grim reality is that Britain is not going to be liberated – not least because it was never oppressed.

Its attempt to find a place for itself in the world will drag on through 2020, but almost certainly without producing any resolution. Indeed, a resolution may be impossible, since the whole Brexit project is fundamentally anachronistic in an age when the need is for a much deeper pooling of national sovereignty in the face of an existential threat to humanity.

For Ireland, a particular concern will be whether, if Johnson carries out his promise to conclude the transition period at the end of 2020, the complex arrangements for a so-called border in the Irish Sea will be in place. Nothing in this saga so far has generated much confidence on that. But the travails of our neighbour must not be in 2020, as they have been in the last few years, an excuse for inertia in either part of our island. The political parties in Northern Ireland must accept their responsibility to govern. Something similar is true south of the Border.

There has been too much drift on too many issues – the looming issue of Brexit has created a kind of suspended animation. Whatever the outcome of the election, there is a need for real animation on the housing crisis, on child poverty, on healthcare reform and on the decarbonisation of the economy.

If Ireland is to be an oasis of democracy in a turbulent world, it needs to prove to itself that democracy solves problems while its enemies continue to exacerbate them.