The Irish Times view on the world in 2019: power to the people

We assume that human agency is being swept away, but 2019 reminded us that individuals can shape world events 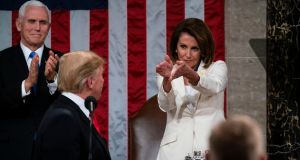 This was the year of Nancy Pelosi, whose decision finally to bow to internal Democratic Party pressure and pursue Trump for abuse of power over his dealings with Ukraine led to only the third impeachment of a president in US history. Pelosi, reinvigorated as House Speaker, marshalled the process with poise and a keen political antenna. Photograph: Doug Mills/The New York Times

In this age of technological revolution and economic globalisation, it is often taken as given that human agency has been eroded, if not swept away, by the broader forces that structure our daily lives. Yet 2019 was a powerful corrective to that assumption, because this was a year that reminded us of the capacity of individuals to shape world events.

For those of us who cherish liberal democracy, the result was cause for alarm. We are living in the age of Trump. In the third year of his term, the US president, liberated by the limited fallout from the Mueller inquiry and surrounded more than ever by hard-right nationalist acolytes, seemed to behave with fresh abandon at home and abroad. He alienated allies and indulged his country’s rivals, his affinity for dictators and disdain for multilateralism further undermining the postwar alliance system his country did more than any other to create.

But this was also the year of Nancy Pelosi, whose decision finally to bow to internal Democratic Party pressure and pursue Trump over his dealings with Ukraine led to only the third impeachment of a president in US history. Pelosi, reinvigorated as House Speaker, marshalled the process with poise and a keen political antenna. The question that will preoccupy the US in 2020 is whether Trump can win re-election in November. The larger question is whether, in the long term, his brand of chaos politics is an aberration or a taste of things to come.

Trump’s hostility towards democratic norms was chiefly of benefit to more conventional despots such as Vladimir Putin and Xi Jinping, but the Russian and Chinese leaders both have reasons to fret on the home front. While Putin consolidated his influence in the Middle East and Africa, and will have taken satisfaction from the Brexit debacle and Nato’s persistent infighting, no amount of police repression can mask the social discontent that led to a series of protests in Russian towns and cities this year. Similarly, while Xi celebrated the 70th anniversary of Communist rule in China, his government was left rattled by events in two of its farthest outposts.

Intense focus on Xinjiang in China’s remote northwest, informed by a series of revealing leaks about Beijing’s systematic repression and mass incarceration of the Uighur minority there, put China on the defensive and brought it a level of global condemnation to which the Communist Party, so accustomed to using its country’s economic might to silence foreign dissent, is not all that familiar. Fury over Xinjiang coincided with foreign opprobrium over Hong Kong, where protests over a botched extradition law and the durability of the “one country, two systems” policy morphed into an energetic democratic movement, led by young people whose ingenuity and idealism made the Party look sclerotic and slow.

In this age of activism, the Hong Kong protests reflected a broader trend. Across the world, from Lebanon to Chile and from Iraq to Colombia, people took to the streets to demand better living standards and better politicians. And in some cases they succeeded.

A relative decline in violence levels in Syria and Yemen brought badly needed respite for survivors of war in both countries, but the political beneficiaries of these shifting dynamics were three brutal strongmen in Syria, Turkey and Saudi Arabia. Syrian president Bashar al-Assad may not control large parts of his country, but he has retained his hold on power and dodged real accountability for the crimes of his regime. Recep Tayyip Erdogan of Turkey took full advantage of the green light from Trump to mount an assault on America’s Kurdish allies in northern Syria.

The election of 34-year-old Sanna Marin as prime minister of Finland, at the head of a government dominated by women, was an invigorating, positive moment for a whole continent

The instability that created meant that Islamic State, despite having had its figurehead Abu Bakr al-Baghdadi killed in an American airstrike, finished the year in a position to reorganise and regroup. Meanwhile, with Yemen moving off the global agenda, Saudi crown prince Mohammed bin Salman cemented his power as de facto leader despite the conclusion of western intelligence agencies that he ordered the murder of dissident journalist Jamal Khashoggi.

But if 2019 gave us lessons in how bad leaders can cause harm and instability, it also reminded us that good ones can give us reason to hope. Emmanuel Macron held off populists threats in France and offered an ambitious vision for the European Union at a time when big thinking is in retreat on the continent.

In New Zealand, Jacinda Ardern’s dignified and powerful response to the Christchurch mosque murders in March was a model of compassion and righteous anger. The election of 34-year-old Sanna Marin as prime minister of Finland, at the head of a government dominated by young women, was an invigorating, positive moment for a whole continent.

Marin is old compared to one of the world’s most impressive leaders in 2019, however. With grit and persistence, the Swedish 16-year-old Greta Thunberg drew huge crowds around the world and shamed global powers with her impassioned advocacy for action on the climate emergency.

1 Coronavirus: Aer Lingus cabin crew in self-isolation after passenger’s positive test
2 Murder in a crowded house: The full story of the Patricia O’Connor trial
3 Joshua Allen jailed for 15 months for drugs offences
4 Britain is uncomfortable because Ireland has the upper hand for the first time
5 Coronavirus: Myths that have gained traction
Real news has value SUBSCRIBE