And as the situation worsens, criticism of the state is growing 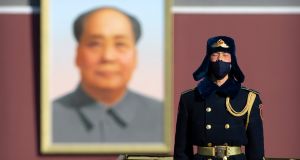 A member of a Chinese honour guard wears a face mask as he stands guard on Tiananmen Square in Beijing on Tusday. Photograph: Mark Schiefelbein/AP

As the coronavirus has developed over the past month, Chinese president Xi Jinping has kept a noticeably low profile. There has been no presidential visit to Wuhan, the city where the outbreak was first reported. Absent from state media coverage have been images of Xi at hospital bedsides or convening emergency meetings. If by taking a back seat Xi hoped to insulate himself from criticism over the handling of the health scare, however, the scale of the crisis has made that an untenable position. The government has now reported 20,438 confirmed cases – about 15,000 more than during the Sars outbreak in 2002 – and the death toll has reached 420.

And as the situation worsens, criticism of the state has grown. Questions have been raised over the lack of transparency, particularly in the immediate aftermath of the first reported cases in late December, and over the lock-down of Wuhan, a city of 11 million people, when there was not enough medical supplies or hospital capacity to cope with the influx of patients.

Xi reappeared on Tuesday. At a special politburo meeting, the president called the crisis “a major test of China’s system and capacity for governance” – an implicit admission that the official response has fallen short. Xi signalled a stronger approach, warning officials not to resist orders or let “bureaucratism” get in the way of the emergency response.

There is some encouraging news. While the death toll from the new coronavirus on mainland China has exceeded that of the Sars outbreak, Chinese authorities have reported a steady rise in the number of recoveries. Sars had a mortality rate of 9.6 per cent. Although it’s still relatively early to judge, about two per cent of those reported as infected with the coronavirus have died. But with many states now advising their citizens to leave China and no sign as yet that the spread of the virus has been brought under control, Beijing is facing one of its biggest challenges in decades. Xi, having spent the past two years centralising power in himself, is particularly exposed.