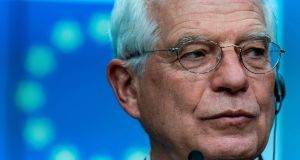 The EU’s new foreign policy chief, the experienced and hard-nosed Josep Borrell, has spoken of Europe learning 'to use the language of power'. Photograph: Kenzo Tribouillard/AFP via Getty Images

EU debates about its role as a global power are as old as the European project itself. Yet every effort to turn the bloc into a genuine geopolitical player has come up against the same obstacles: internal divisions, nation-state supremacy in foreign affairs, and concerns about smaller states being bounced into decisions by their larger neighbours. The result is that, despite its status as an economic superpower, in foreign policy the EU has consistently amounted to less than the sum of its parts.

The latest revival of the idea of a “global Europe” is ostensibly down to a changing of the guard in Brussels. The new president of the European Commission, Ursula von der Leyen, supports a “stronger Europe in the world”. The new foreign policy chief, the experienced Josep Borrell, says Europe must learn “to use the language of power”. But the real reason for this new urgency is a fast-changing world. Today, the EU is confronted with a revisionist Russia, an increasingly dominant China, a United States detaching itself from the multilateral system and a series of crises – in Turkey, Iran, Libya and elsewhere – that have brought threats and instability to its doorstep.

At times, projecting European power will require Europe to be more assertive

EU foreign policy debates typically take place at the level of principle. And there is broad agreement on these. The main priorities in the strategic agenda adopted last summer by the European Council are multilateralism, democracy, global trade, international security, climate change and the digital sphere. In some of these areas, including trade and digital privacy, the EU has shown real leadership. But insisting on principle is not enough. “If we only preach the merits of principles, and shy away from exercising power in the geopolitical arena,” as Dutch prime minister Mark Rutte has said, “our continent may always be right, but it will seldom be relevant.”

This does not necessarily require new powers, however. There is little appetite for treaty reform, and there is insufficient support for the recently mooted idea of moving away from unanimity in foreign policy. Instead, the EU needs to sharpen its focus on areas in which it can make a difference. The Iran nuclear deal was a good example, even if Donald Trump’s attempts to destroy that achievement have exposed some of Europe’s limitations. Another strategic priority must be Libya, where, after years of excessive focus on keeping out migrants at the expense of searching for a political solution to the country’s crisis, the European Council took important steps this week to facilitate a ceasefire and enforce an arms embargo. Venezeula’s political crisis, Syria’s reconstruction and transitions in Ethiopia and Sudan are examples of areas in which Europe’s clout can be deployed in the service of its values. At times, projecting European power will require it to be more assertive. At others, pragmatism and leadership-by-example will be far more important.