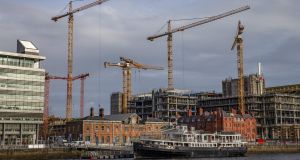 Economic growth and tax revenues have exceeded forecasts during the term of the outgoing government, but some very significant risks remain. Photograph: Hollie Adams/Bloomberg

Over the next week the political parties will reveal their full manifestos for the forthcoming general election, including their projections and plans for the public finances. It is a key area of policy, but also one which is difficult to plan for with any certainty. Economic growth and tax revenues have exceeded forecasts during the term of the outgoing Government, but some very significant risks remain. With a national debt still in the region of €200 billion, the exchequer remains exposed if growth drops or corporate taxes go into reverse.

Parties, of course, need to outline their plans if growth follows the relatively optimistic trajectory estimated by the Department of Finance in its recently updated forecasts. But they also need to tell us what they would do if growth slows or corporate tax receipts fall away more quickly than estimated.

Much of the focus of the electorate is likely to be not so much on what cash is promised, but rather exactly how the various parties propose to deliver improved services

A particular risk over the next year is a failure by the EU and UK to agree a trade deal by the end of 2020, possibly leading to the UK trading on WTO terms. This would disrupt Irish trade with the UK – and carry a significant economic and budgetary cost.

Minister for Finance Paschal Donohoe sensibly framed the budget for this year on the basis of a no-deal Brexit at the end of January, a risk which is no longer on the table. This avoided the normal pre-election tax-and-spending packages. However, whoever is minister next October may face a similar picture, with uncertainty then over the outcome of EU/UK trade negotiations. Would caution two years in a row be too much for the Irish political system to cope with?

We have seen before how the economy can veer from strong growth to recession and back. A key goal of the next administration must be to do what it can to calm this economic cycle. As a small open economy, growth here will always react to what happens internationally. There is only so much we can do. But the old habit of spending right to the limit – and beyond – when cash is available must be broken.

Indeed much of the focus of the electorate is likely to be not so much on what cash is promised, but rather exactly how the various parties propose to deliver improved services. This is complicated territory for an election campaign, but would be a better use of time than trading insults over who is best able to look after the exchequer finances.

In addition to using the cash we have well, we need to try to avoid leaving ourselves exposed to having to cut spending again or to hike taxes significantly in the face of a renewed downturn. Instead, we need to build up leeway to allow the government to try to limit the impact of any downturn. Most of the major parties accept this, though putting it into practice over a period of years will be another matter.