The Irish Times view on Election 2020: choosing what society we want

Should Fine Gael be rewarded for the economy or pay the price for not getting to grips with housing, homelessness and the health service? 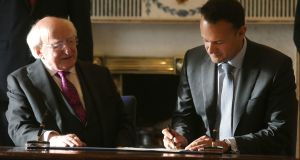 Election 2020 is shaping up to be a highly charged contest between Leo Varadkar and Micheál Martin to lead the next government. Their past records are valid indicators of future performance but the electorate should not be too distracted by a simplistic characterisation of ‘newish broom’ versus ‘older dog’. Fine Gael and Fianna Fáil are unlikely to command much more than 50 per cent of votes cast and, in considering their preferences and the likely composition of the next administration, voters should concentrate on the bigger picture of policy – across the political spectrum – and what type of society they want to live in. Politics is about choices.

Should Fine Gael get credit for its stewardship of the economy or for its positive record on Brexit? What of the Taoiseach’s potentially divisive gambit of tax cuts for those who “get up early in the morning”? Should his party pay the price for not getting to grips with housing, homelessness and the health service?

Fine Gael will focus on the economy, where Minister for Finance Paschal Donohoe has walked a fine line between spending on public services and the need to keep the exchequer finances in balance. In quantum terms, he has probably got it about right but controversy over the management of capital spending has blemished Fine Gael’s cherished reputation for prudence.

Brexit is the big issue on which the Government can claim to have performed well. The problem for Fine Gael is that voters will be more interested in what it is offering for the future than in rewarding it for what it got right in the past. That is where housing and health could hurt.

Fianna Fáil is entitled to claim a share of the credit for success on Brexit and the economy. The confidence and supply arrangement provided political stability during a critical period. The passage of time has also distanced the party from the dark days of economic collapse although Fine Gael will be keen to re-kindle those memories. Fianna Fáil will target voter fatigue with the outgoing administration and the weaknesses in its record. Its challenge will be to define its own policies and convince the electorate it can do better.

The local and European elections suggest Sinn Féin has slipped back in recent times after a serious breakthrough four years ago. Its demand for an early border poll appears to be out of tune with voters’ priorities. Yet the election will provide an opportunity for Sinn Fein and other parties, including the Greens and Labour, to put forward alternative policies and to position themselves to try to influence future government formation.

If there is any certainty, it is that the Greens have gained huge impetus from climate change and can hope to capitalise on that. One other certainty – if past experience is any guide – is that unexpected twists and turns will emerge between now and polling day on February 8th.