Irish Times view on European Green Deal: States must dig into their pockets

EU leaders have signalled their ambition on climate action. Now they must release cash 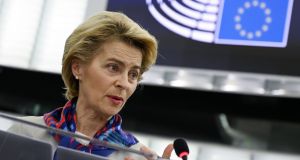 European Commission president Ursula von der Leyen during the presentation of the priorities of the rotating presidency of the European Council for the next six months at the European Parliament on January on Tuesday. Photograph: Frederick Florin/AFP via Getty Images

Young people are on the streets worldwide. Australia is retreating before unprecedented fires. At their December summit, Europe’s leaders responded to the growing clamour for action by signalling their ambition and unanimously endorsing the Commission’s European Green Deal and the promise to be carbon-neutral by 2050.

Now they must demonstrate the political will to set – and then meet – unpopular binding national emissions targets, to pass legislation that will set new standards for everything from home insulation to car exhausts and plastic waste, to put our money where our mouth is. To pay for it.

In pledging to mobilise €1 trillion for the European Green Deal on Tuesday the Commission put it up to member-states to give it the means. That €1 trillion is not enough, experts agree, but it is a necessary start.

The Commission is rightly determined both to make this the cause of its mandate, mainstreaming climate change into every policy area, promising to spend a quarter of all its cash on environment/climate-related projects, and to lead the world on the issue.

But the €1 trillion, a combination of EU budget cash, member-state contributions and some €200 billion in leveraged private sector investment, is at the moment just an aspiration predicated on the successful conclusion of the fraught 2021-2027 EU budget (MFF) negotiations.

An important element of the Commission’s funding package is the promise to mobilise some €100 billion of grants, investment and loan guarantees for a “just transition mechanism” to help member states faced with particular challenges in breaking from coal, lignite or peat dependency.

The €7.5 billion grant element, the “just transition fund”, which will consist of “new money”, will see the most affected country, Poland, given some €2 billion while Ireland is to be promised €30 million as assitance for breaking reliance on peat.

Member states will have to top up every euro from the fund with up to three euros from their social and regional fund allocations.

These are the issues which are central to the agenda of the meetings between Taoiseach Leo Varadkar and Commission President Ursula von der Leyen on her current visit to Dublin.

Among net contributors to the EU budget only Ireland and France have spoken – and then only in general terms – of the need to dig far deeper into their pockets than the latest Finnish compromise on the budget suggests. It is still far short of the Commission’s budget proposals which are based on payments totalling 1.14 per cent of EU-wide grass domestic income.

A willingness by wealthier member states to commit to the Green Deal politically must now be matched by a commitment to provide the wherewithal.

1 Conor McGregor stops Donald Cerrone in 40 seconds on UFC return
2 I rationed sex in my marriage for 20 years - but since menopause, my libido has rocketed
3 The cost of a Dublin cottage refurb: ‘We struggled with the mortgage lending rules’
4 Harry and Meghan will no longer be working members of British royal family
5 ESPN, UFC ignoring McGregor’s shady actions to capitalise on pay-per-view king
Real news has value SUBSCRIBE