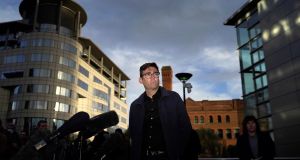 Greater Manchester mayor Andy Burnham speaks to the media outside Bridgewater Hall, in the shadow of the North West Nightingale Hospital at Manchester Central, on Tuesday. Photograph: Christopher Furlong/Getty Images

In shifting its pandemic strategy from a national to a regional approach the UK government made much of moving forward in partnership with local authorities. It admitted that local expertise in testing and tracing could do much to enhance the creaking national programme.

But partnership consisted largely of London telling the regions what they should do – and the decisions about who should move to higher tiers of lockdown remained very much with government. Likewise financial support for business and furlough. Cash-strapped local authorities had little choice but to fall in line.

Not quietly, however, and the open rift between Boris Johnson and Greater Manchester, its Labour mayor Andy Burnham and a number of local Conservative MPs, was inevitable. Burnham’s demand for £90 million in extra cash to help the city’s low-paid, by sustaining furlough payments at 80 per cent of wages, ran into Treasury attempts to limit its exposure to similar demands in other cities.

Johnson made clear he will impose the highest tier-three restrictions on Greater Manchester from tonight without the support of local leaders and with a furlough scheme that will only support two-thirds of wages, at a cost of £60 million. Two other areas that entered tier-three last week, Liverpool city and Lancashire, as well as Sheffield, which will do so soon, have accepted deals involving cash at the same level.

But the spat between ministers and Burnham, accused of “politicising” the issue, may mark an important turning point in the management of the pandemic, a break in the political bipartisanship that has seen Labour backing, albeit critically, the government. It is now significantly out of step, with the party increasing pressure to impose an England-wide “circuit-breaker” in line with advice by the government’s scientific advisers. While the government has a comfortable Commons majority it will face increasing difficulty in getting popular buy-in to tougher measures, and may be forced to rely less on public consent than on increasingly coercive measures such as fines .