The Irish Times view on the Golden Dawn trial: fascism on the retreat

Democracy consigned the Greek party to history, but a court this week put the final important legal seal on its eclipse 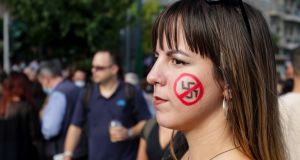 Anti-fascist protesters outside the court where the trial of leaders and members of the Golden Dawn far-right party was taking place on Wednesday. After a five-year trial, the court found the Golden Dawn leader Nikos Michaloliakos and six associates guilty of running a criminal group. A supporter, Giorgos Roupakias, was found guilty of murder and 15 others were convicted of conspiracy. The neo-Nazi party won 18 MP seats in 2012 as the country grappled with a financial crisis. Photograph: Milos Bicanski/Getty Images

Before the Athenian court on Wednesday passed judgment on 68 members of Europe’s most virulent neo-Nazi party, Golden Dawn, the Greek people had already done so. The toxic party, deemed by the court a criminal conspiracy, had won 18 seats in 2012, and yet more as Greeks were battered by financial crisis, but it failed to win any seats last year, polling below the 3 per cent threshold for entering parliament.

Democracy consigned the party to history, and the court put the final important legal seal on its eclipse, as jubilant crowds of thousands celebrated outside. Seven ex-MPs, including leader and self-avowed Hitlerite Nikos Michaloliakos, were found guilty of directing the organisation. Others were foudn guilty of crimes including murder, attempted murder and possession of weapons. Some now face up to 15 years in prison.

Michaloliakos has described Golden Dawn as a patriotic party of ultra-nationalists and the trial as a witch-hunt. But the court tied it to a string of attacks including the 2013 fatal stabbing of left-wing rapper Pavlos Fyssas whose killer was found guilty of murder. Another five were found guilty of attempted murder over assaults on three Egyptian fishermen in 2012, and four of causing bodily harm over assaults on members of Greece’s Communist Party trade union in 2013.

Formed in the 1980s by an ex-Greek army commando, Golden Dawn has been involved in violence since the 1990s against immigrants, LGBTQ communities and political opponents. Its assault squads of uniformed members, sometimes armed, even sought to take over entire neighbourhoods by attacking and intimidating parts of the local population. Much of the violence was carried out openly, but for years, unpunished.

The lengthy court process, described by some as the largest trial of Nazis since Nuremberg, is testimony to the deeply embedded quality of the rule of law in democratic Greece. Its years of economic suffering and of volatile street politics have not shaken fundamental values. No new dawn for the colonels or their latter-day apologists.