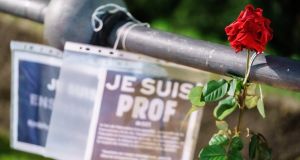 A flower and a message reading in French language ‘I am teacher’ are placed at the site of a vigil to pay respect to beheaded French teacher Samuel Paty in front of the French embassy, in Berlin, Germany. Photograph: Clemens Bilan/EPA

The huge rallies across France at the weekend over the beheading of the 47-year-old teacher Samuel Paty were moving testimony to the profound hurt and fear engendered by this brutal terrorist act. And to the commonly held sense that this was an attack, mirroring that in 2015 on the Charlie Hebdo magazine, not just on an individual but on a cornerstone of the French state and national values.

“A man has been savagely and premeditatedly killed," Le Monde editorialised,  "because he integrated freedom of thought, expression, writing and drawing into his teaching. This freedom needs to be taught. It is intrinsic to the fundamental values of our country, at the heart of our history, identity and culture, and it is under attack."

Paty was executed by 18-year-old Abdoullakh Abouyezidevitch Anzonov over the teacher’s use in class of a cartoon of the Prophet Muhammed to illustrate a lesson on freedom of speech. A parent of a 13-year-old in that class at the Bois-d’Aulne secondary school in Conflans-Sainte-Honorine, in Yvelines, north-west of Paris, had posted protests about and named the teacher online, and the young man, a Chechen immigrant, had travelled 60 kilometres to kill someone he had never met. He too then used social media to post pictures of the severed head that were seen by Paty’s students.

The killing came just days after the opening of the trial of alleged accessories in the 12 related 2015 Charlie Hebdo murders, marked also by the magazine’s republication of two of the cartoons.

Some have blamed the magazine, as they did in 2015, for being provocative and offensive to Muslims. But if it is so, it is no more offensive than the opening of the trial. And freedom of expression is ultimately, uncomfortable to many though that may be, about the freedom openly to confront and discuss the difficult and unorthodox, and sometimes to offend. That discomfort is the necessary price we pay for pluralism – and we must echo unapologetically the placards held up in Paris: “Je suis Samuel”, just as we said “Je suis Charlie”. France and her friends will not be cowed.