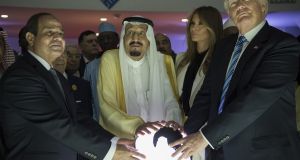 US president Donald Trump and US first lady Melania Trump, posing for a picture with Egyptian President Abdel Fattah el-Sisi and Saudi Arabia’s King Salman bin Abdulaziz al-Saud during the inauguration of the Global Center for Combating Extremist Ideology “Etidal” in Riyadh in May 2017. Saudi Arabia was defeated in its attempt to win election to the UN Human Rights Council last week. Photograph: Bandar Al-Jaloud/Saudi Royal Palace/AFP via Getty Images

The UN’s Geneva-based Human Rights Council was established in 2006 to replace a widely discredited predecessor which had been tarnished by the poor rights record and impunity of some of its own members. The new council, which has no legal powers beyond its ability to shine a light on abuse, has found it impossible, however, to shake off that legacy, a prisoner of a UN voting system that lets the world’s worst abusers take places in its ranks.

That the latest round of secret voting for 15 vacant seats should see one of them, Saudi Arabia, defeated – though it received support from 90 states – is some, but little, comfort to those who want to see the council thrive and its credibility strengthened. The 193 UN member states nevertheless elected China, Russia, Pakistan, Cuba, and Uzbekistan, all notorious abusers.

China has sent thousands of Uighur Muslims to state re-education camps in Xinjiang province and severely curtailed freedom in Hong Kong. Russia is accused of using military grade nerve agent to poison dissident Alexey Navalny, and has cracked down on freedom of speech and protest. Uzbekistan is involved in arbitrary arrests, religious persecution and torture. Pakistan has curtailed freedom of expression and religion, and allowed extra-judicial killings and disappearances.

These states cannot be expected to contribute to upholding the council’s mandate to strengthen universal human rights standards. On the contrary, the record is that they will do what they can to undermine them to provide cover for like-minded abusers, and to circumscribe universalism with a sovereignty-based, relativistic rationale for turning a blind eye or excusing the inexcusable.

Flawed as it is, the council does important work, remaining the best multilateral human rights instrument available to the world. Its weaknesses must not be allowed to hobble its work in the absence of a viable alternative. The US’s withdrawal in 2018, ostensibly because of such lacunae and an “ anti-Israeli bias”, has seriously undermined the council and it is to be hoped a new US president will revisit that decision.