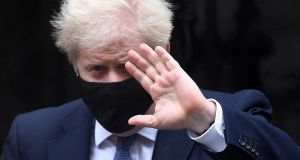 Boris Johnson has agreed to distribute £60 million (€66m) to boroughs in Greater Manchester after the region’s mayor Andy Burnham rejected the sum as inadequate to cushion the impact of a local lockdown that comes into force on Friday. The prime minister’s move came after local MPs, including Conservatives, criticised his decision to move place Greater Manchester’s 2.8 million people under Tier 3, the highest level of coronavirus restrictions.

Labour leader Keir Starmer said the government’s three-tier system of local lockdowns was condemning large parts of England to months of prolonged agony with no clear route out of the restrictions and with inadequate financial support.

“On Friday, thousands of people in Greater Manchester – taxi drivers, pub and hospitality workers, people working in betting shops, the self-employed and freelancers – will either be out of work or face significant pay cuts. That is the reality on Friday in Greater Manchester. But their rent and their mortgage will not be lower; their food and their heating bills will not be lower – and that could last for months,” he said.

“Why can the prime minister and the chancellor not understand that? They should stop bargaining with people’s lives, stop dividing communities and provide the support that is needed in Manchester.”

Britain’s furlough scheme, which paid 80 per cent of furloughed workers’ wages, has been phased out over the past few months and will be replaced at the end of October with a much less generous scheme. But Mr Johnson defended his regional approach to tackling coronavirus, asserting that no other country in Europe had been so generous in its support for those affected by the pandemic, and criticising Sir Keir’s call for a time-limited “circuit-breaker” lockdown.

“I have explained why I do not believe that his policy is the right one for the country, because it would involve closing schools and shuttering businesses, with all the psychological and emotional damage that a lockdown of that kind brings. He cannot say how many circuit breakers he thinks would be necessary. He cannot say how long they would go on. He cannot say how much damage they would do to the UK economy and to people’s mental health,” the prime minister said.

The government comfortably defeated a Labour motion in the Commons calling for more generous economic support for regions under local lockdowns. But a number of Conservatives spoke out in favour of a second Labour motion backing Manchester United footballer Marcus Rashford’s call for free school meals to be provided during holidays until Easter 2021.

Education select committee chairman Robert Halfon said the government should use the proceeds from a sugar tax to cover the cost of the extra free meals.

“If we acknowledge that children risk going hungry in term time by providing them with free school meals, despite the provision of universal credit and the other things that have been mentioned by the government, we know that they risk going hungry in the holidays too. We should ringfence £340 million a year revenue from the tax on the sugary drinks to cover the cost of these proposals,” he said.

Labour’s motion was defeated by 322 to 261 and free school meals will not be provided during the autumn mid-term break that begins on Friday.