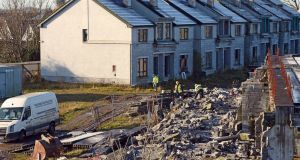 Developing social housing involves seeking approval from the Department of Housing, a process which has been shortened, but if the development is large, takes more than a year. Photograph: Eric Luke

Vast sums of money have been thrown at the housing problem every year since the end of the last recession but have yet to make an appreciable difference. Those directly involved in the provision of social housing maintain that money isn’t the problem, the process is.

Developing social housing involves seeking approval from the Department of Housing. That process has been shortened but if the development is large, it takes more than a year. Schemes also require the sanction of councillors and this can take several years, particularly if they are uneasy about the method of delivery, such as the use of public private partnerships (PPPs) with developers. Then there is the procurement process which requires each development to go through an EU public tender procedure, instead of local authorities selecting from a panel of pre-qualified contractors. Finally there is the planning process which is sometimes conducted “in-house” by the local authority, but can require an application to An Bord Pleanala, particularly if there is a social and private mix to the development. In either scenario, local objections are likely which, housing providers say, account for a lot of the delays in developing social homes.

The delays to the delivery of an affordable housing purchase scheme are a little harder to fathom. This measure, to provide State subsidised housing to low- and middle-income first-time buyers, was promised in the budget five years ago, and despite being re-promised each year since, is still not in place. Minister for Housing Darragh O’Brien said he would publish details of a new affordable housing scheme within weeks. However, if the promises made since Budget 2016 had materialised, thousands of low- and middle-income workers would be in their homes by now.

A large part of the failure to deliver on either the construction of social housing or affordable homes, is the annual budget format itself. Yes targets need to be set and need to be met but this is best done through multi-annual capital programmes.