Infection rate has accelerated since late August to frequently exceed 10,000 cases a day 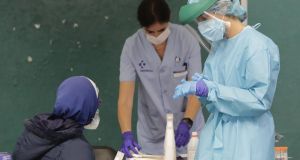 Spain became the first western European country to exceed 1 million coronavirus infections on Wednesday, doubling its tally in just six weeks despite a series of increasingly stringent measures to control the second wave.

After slowing to a trickle in the wake of Spain’s strict March to June lockdown, the infection rate accelerated to frequently exceed 10,000 cases a day from late August, and hit a new peak of more than 16,000 last week.

A hurried exit from confinement before tracing systems were in place let transmission get out of hand faster than in other countries, said Dr Rafael Bengoa, co-founder of Bilbao’s Institute for Health and Strategy.

He also blamed Spain’s deeply entrenched political polarisation for the rise. “There’s a lot of political noise but a shocking leadership vacuum,” he said.

As Spain’s health ministry released the latest figures, most of its politicians were bitterly debating a motion of no confidence in Socialist prime minister Pedro Sanchez launched by the far-right Vox party.

“These politicians are only comfortable with the simplicity of short-term... ideologically motivated debates, but the virus doesn’t care about ideology,” Dr Bengoa said.

While daily deaths have been hovering around 100 – a far cry from the peak of nearly 900 registered in late March – nationwide hospital admissions have jumped 20 per cent in two weeks and 70 per cent in Catalonia.

Meanwhile, Italy has registered 15,199 new coronavirus infections over the past 24 hours, the health ministry said, the highest daily tally since the start of the country’s outbreak and up from a previous record of 11,705 posted only on Sunday.

The ministry also reported 127 Covid-related deaths on Wednesday, up from 89 the day before but still far fewer than at the height of the pandemic in the country in March and April, when a daily peak of more than 900 fatalities was reached.

After declining over the summer, infections have steadily accelerated in the last few months.

They are now far more widely distributed around the country than during Italy’s first wave, but the hardest hit region is once again Lombardy, around the financial capital, Milan.

On Wednesday, Lombardy accounted for 4,125 of the country’s new cases, with Milan and its hinterland close to 2,000 infections over the last 24 hours.

The number of people in intensive care with the virus has risen steadily. It stood at 926 on Wednesday, up from 870 on Tuesday and compared with around 40 in the second half of July.

There are now around the same number of intensive care patients as when the country went into national lockdown on March 9th, though at that time they were far more heavily concentrated in northern regions.

Italy was the first country in Europe to be hit by Covid-19 and has the second-highest death toll in the continent after Britain, with 36,832 fatalities since the outbreak flared in February, according to official figures.

Prime minister Giuseppe Conte has said he is determined to avoid another national lockdown of the kind imposed between March and May, and is instead urging local authorities to decide what is best for their own regions.

Lombardy decided on Monday to introduce a curfew from 11pm to 5am to shut down late-night gatherings where the virus might easily spread. On Wednesday, after the latest infection numbers, it announced the closure of secondary schools from Monday.

France, meanwhile, has more than 900,000 cases and could also surpass 1 million this week, though its population is around 40 per cent larger than Spain’s. On Wednesday, France reported 26,676 new Covid-19 cases, where there had been 20,468 cases on Tuesday.

Both Britain and Italy have reported more deaths than Spain, but fewer overall infections.

More than 40.91 million people have been reported to be infected by the novel coronavirus globally and 1,125,339 have died with the virus, according to a Reuters tally. Infections have been reported in more than 210 countries. – Reuters