The Irish Times view on concussion in rugby

Former rugby internationals Steve Thompson (42) and Alix Popham (41) share their stories of being diagnosed with early-onset dementia as a result of repeated blows to the head during their playing careers. Video: David Dunne 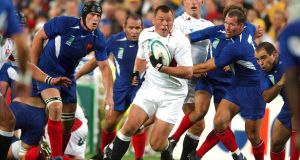 This week’s news of a group law suit to be taken by over 70 former rugby players suffering from the life-changing effects of concussion had come to seem inevitable.

Following the class action involving up to $1 billion taken against the NFL in the United States by former players suffering from the effects of repeated head trauma leading to the progressive brain disease Chronic Traumatic Encephalopathy (CTE), it was likely that duty of care for players in rugby would be seriously questioned on this side of the Atlantic. That is now happening through a London firm, with 10 Irish players also asked to be part of the litigation. It is unknown how many of the 10 have agreed to participate.

The overall effect of such massive litigation... is that the sport will have to take an existential look at itself

The legal freight train arrived along with the disturbing story of former England rugby player Steve Thompson, adding to a growing collection of narratives on the terrible consequences of suffering repeated blows to the head.

Thompson cannot now remember a World Cup in which he played and won in 2003. Former Leinster player Dominic Ryan, before retiring in 2018, was forced to spend hours in a darkened room with migraine, blurred peripheral vision and flashing white patches that resembled “looking at fireworks through binoculars”.

They can only hope their conditions do not deteriorate. But that optimistic outlook is uncertain.

The overall effect of such massive litigation, aside from financial burdens that may fall on World Rugby and the other unions involved, is that the sport will have to take an existential look at itself.

Tackling concussion has improved over the years. Even so, demands to alter the sport to make it safer have been coupled with the law suits. This time rugby will have no option. It will, like NFL, have to implement change.