Putin has ordered large-scale inocculation with vaccine developed in Russia 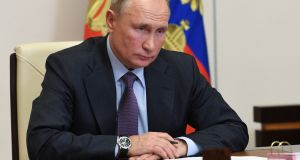 Russian president Vladimir Putin thumbs his nose at western opinion of the occupation of Crimea, murder attempts on his critics, Moscow’s meddling in foreign elections and a host of other issues, but the country’s international standing clearly still matters to the Kremlin.

Public relations, politics and a hunger for global prestige have played a striking part in Russia’s unveiling and rollout of its Sputnik V coronavirus vaccine, which teachers, medics and other key workers were offered for the first time at Moscow clinics this weekend. Putin hailed Sputnik V as the world’s first registered Covid-19 vaccine in August, when Russian regulators approved it before phase 3 clinical trials had even begun.

While Russia may have some of the finest scientists in the world, it is run by a regime notorious for duplicity

Last month, when US-German team Pfizer-BioNTech announced that their vaccine was 90 per cent effective, Russia made a matching claim for Sputnik V the very same day; then, just hours after Britain revealed that it would start large-scale inoculations, Putin ordered his officials to do the same. The sense of competition is clear: even the name that Moscow chose for its first Covid-19 vaccine evokes Soviet superpower might, the Cold War space race and a time – perhaps the last time – when Russian science led the world.

Putin’s 20 years of political repression and gross corruption have delivered no great innovation – there is no Russian Apple, Nokia, Skype or Samsung. Instead, oil, gas and metals still dominate an economy mired in bureaucracy and cronyism, which supports some 100 billionaires while paying an average monthly wage of just €550.

Some western experts are concerned about Moscow’s rush to register Sputnik V, the relatively small sample size in trials and the transparency of results, but there is no evidence that the vaccine is not as effective or as safe as its developers claim. Ultimately, it comes down to trust, and while Russia may have some of the finest scientists in the world, it is run by a regime notorious for duplicity.

The Kremlin that expects the world to believe that its troops did not invade Crimea or eastern Ukraine, and that no Russian state actors played a role in downing the MH17 airliner or in poisoning Alexander Litvinenko, Sergei and Yulia Skripal and Alexei Navalny, now wants millions of people across Russia and around the globe to roll up their sleeves for Sputnik V before standard trials are even completed. This, at a time when Russia’s coronavirus data are also under scrutiny: the state statistical agency said last month that from April to September 55,671 people died with Covid-19, which is more than double the direct death toll officially reported earlier.

A recent survey showed 59 per cent of Russians are unwilling to take a coronavirus vaccine – a clear signal to the Kremlin that no amount of propaganda can secure real public trust.