Britons arriving in the Netherlands since the start of 2021 have been met with new strict rules on the import of meat, fruit, vegetables and fish from outside the EU. Video: Reuters 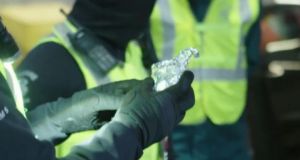 Brexit has come to this. Dutch customs officers are seizing ham sandwiches from the luggage of travellers coming off the ferry from Britain.

“Welcome to the Brexit, sir,” one jokingly tells a bemused truck driver with several tin-foil-wrapped sandwiches. “Can you take the meat and leave me the bread?” the driver pleads. “I’m sorry,” the officer replies.

“We are simply executing regulations,” says Bob vant Klooster, a Dutch customs spokesman. “As of January 1st, it is no longer allowed to bring in perishable goods from the UK for travellers.”

The UK’s Department for Environment, Food and Rural Affairs (Defra) says travellers should “use, consume, or dispose of” prohibited items at or before the border. Fresh food (dairy and meat “products of an animal origin”) may not now be imported under the EU’s strict phytosanitary regime. Unless, that is, an exporter is registered on an EU-authorised exporter list as conforming to EU production and health standards. Dutch customs have also posted a photo of confiscated foodstuffs ranging from breakfast cereals to oranges.

And the same regime applies to any ham sandwich crossing the Irish Sea under the terms of the Northern Ireland protocol. That obviates the necessity for checks on the Irish land Border, but it was a close thing. Back in April 2019, with the UK-EU talks deadlocked, our Brussels correspondent warned that “Buying a ham sandwich in Derry and walking across the Border to eat it in Donegal could be illegal from Saturday week . . . As could that family weekly supermarket shopping trip to Newry from Dundalk”.

In Brussels the report elicited responses ranging from an embarrassed “no comment” from those in the know, to general scepticism. There would be no “ham sandwich” police, we were assured. But thank goodness for the protocol. Now it’s only that “you can’t take a ham sandwich from Birmingham to Belfast” or, for that matter, to Dublin, a commission source confirms.