The Irish Times view on the US Congress attack: a desperate last lashing out

This was the dying convulsion of a regime that is on its way out, not an insurrectionary expression of a popular movement 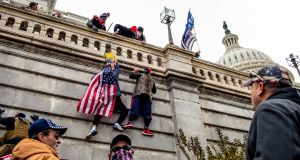 Supporters of US president Donald Trump scale a wall on the Senate side of the Capitol Building in an attempt to disrupt the certification of the Electoral College results on Wednesday. Photograph: Jason Andrew/The New York Times

First the good news, to get it all in perspective. The line held. The will of the American people has been respected. Congress performed its constitutional duty to certify the electoral colleges’ votes confirming the fact of Joe Biden and Kamala Harris’s election as president and VP respectively. Power will pass from President Trump and the captive Republican Party in the White House and the Senate where two stunning Georgia by-elections handed Democrats an effective majority. The siege is lifted, the Capitol corridors cleared of the mob.

Crucially, Congress – by 282 to 138 in the House of Representatives and 92 to 7 in the Senate – finally officially nailed the Trump lie that the “election was stolen”, adding their imprimatur to 62 courts and every state legislature in the country.

And at last, not a moment too late, the disgraceful storming of Congress appears to have brought about the rupture of the majority of the Republican Party from Trump’s political thrall. Senate majority leader Mitch McConnell was unequivocal: it was a “failed insurrection …They tried to disrupt our democracy. They failed”. Even VP Mike Pence, a shameless Trump acolyte for four years, refused to his bidding to throw out the electoral college vote and had a blunt message for his boss: “To those who wreaked havoc in our capital today, you did not win …. This is still the people’s house”.

But the price was heavy: four dead, 14 police injured, offices looted, smashed windows, the floor of congress occupied, guns drawn and tear gas deployed inside a “desecrated” Capitol, explosive devices found. And profound damage to the reputation of a country that boasts of its tradition of peaceful transfer of power.

Questions will be asked about the lack of police preparedness and inability to protect Congress. And about the remarkable – in the circumstances probably advisable – physical restraint demonstrated by them in clearing the Capitol compared to the treatment meted in recent months to Black Lives Matter demonstrators.

But, in truth, Wednesday’s events were less a conscious attempt to seize power or an attempted “coup”, as many commentators characterised it.

It was more a stumbling, rolling riot turned vandalism spree. This was the dying convulsion of a regime that is on its way out, not an insurrectionary expression of a popular movement. It could never have prevailed beyond its immediate objective of thwarting a vote, in the end only delayed.

This was a manifestation of weakness and eclipse, though Trump should not expect to escape legal consequences for inciting an attack on democracy, the shock troops involved praised by him as “patriots”. Impeachment? Probably impossible in the 12 days he has left in office. But prosecutors need to look at possible charges.