The Irish Times view on the death of George Nkencho: assessing the fallout 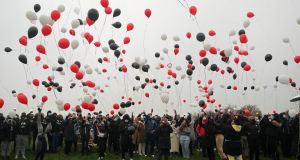 Friends and relations of George Nkencho release balloons to commemorate his life near the spot where he was shot dead outside his home by armed gardaí in Clonee, west Dublin, on December 30th. Photograph: Niall Carson/PA Wire

The tragic death of George Nkencho has left his family and friends in west Dublin reeling, while its fallout has raised important questions about community relations in one of Ireland’s fastest-growing areas. The 27-year-old was shot dead outside his home by the Garda Armed Support Unit in Clonee on December 30th after assaulting a shopkeeper and threatening gardaí with a knife.

A post-mortem concluded that Nkencho, who had mental health problems, was wounded six times – five of the shots were to the torso and one was to the arm.

His killing is the subject of an independent investigation by the Garda Síochána Ombudsman Commission. The commission should be allowed to do its work, and it is important that Nkencho’s family be kept fully informed of the progress of that inquiry.

In the meantime, important broader issues raised in the aftermath of Nkencho’s death warrant serious attention. Protests over the incident took place last week in Blanchardstown, where reports emerged of at times strained relations between the gardaí and members of the African community.

Community organisations have highlighted the vital work that gardaí specialising in diversity issues and local liaison have done in recent years. This is quiet, unglamorous work, but it is also essential in maintaining good community relations and defusing tensions when they arise. Investment in those efforts must be maintained, and not only in west Dublin.

To compound the pain of George Nkencho’s family, his death has provoked some contemptible, racist responses, from the baseless online slur that the young man had a criminal record (he did not) to the sending of hateful and deeply hurtful letters to the bereaved family. That basic inhumanity in no way represents the local community in which Nkencho lived his life.

Nevertheless, it ought to shatter any complacency and remind us that racism is a very real problem that needs to be tackled head-on.