A senior civil servant at the Department of Health is to receive a big pay increase, but will lower-paid officials benefit from similar largesse? 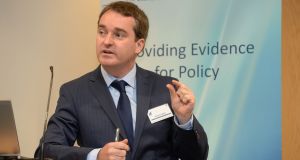 The appointment by the Government on an interim basis of Department of Public Expenditure secretary general Robert Watt as the top official in the Department of Health is a bold move. However the Government’s decision to increase the pay for the role by €90,000 per year when it is filled permanently needs to be explained and justified.

Watt was appointed last week as secretary general of the Department of Health pending a forthcoming open competition. It has not yet been confirmed whether he will be a candidate for the post. But whoever is appointed to the role, following the competition, will earn €292,000 and become the highest paid civil servant in the State,

The Department of Public Expenditure defended the establishment of a de facto new grade of secretary general with that significantly higher salary. It pointed to the fact that the individual appointed will run an organisation with about 600 staff and 19 agencies under its aegis and will have to implement ambitious healthcare reform. However, there are more than 6,600 staff within the Revenue Commissioners, for instance, and its leadership does not earn almost €300,000. Implementation of Sláintecare reform has been Government policy for more than three years.

The Department of Public Expenditure is charged with keeping a close eye on how the State spends money and the scale and efficacy of health expenditure has been a subject of constant debate. Yet the department and the Government need to reassure the public that authorising a €90,000 rise for a top civil service post – at a time when it was insisting on no more than a one per cent increase this year for 340,000 other employees across the public service – will not lead to the start of pay drift at the top of the State sector.

It is certain – and understandable – that a major pay rise for the Department of Health secretary general will be highlighted by others seeking an improvement in their remuneration, whether they be student nurses, public health specialists, medical laboratory scientists or teachers demanding an end to their two-tier remuneration system.