The Irish Times view on Julian Assange: a dangerous prosecution

The US claims the leaks broke the law and endangered lives, but they exposed serious abuses by the military in Iraq and Afghanistan 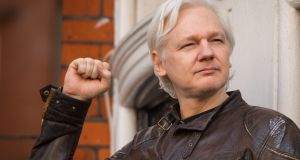 Julian Assange, in 2017, speaking from the balcony of the Ecuadorian embassy in London after a seven-year investigation in Sweden against the WikiLeaks founder was suddenly dropped. On Monday Assange won his fight to avoid extradition to the United States. Photograph: Dominic Lipinski/PA Wire

Yesterday’s decision of a London court not to authorise the extradition to the US of Wikileaks founder Julian Assange is welcome, but the court’s reasoning is disappointing. District Judge Vanessa Baraitser blocked the request because she accepted there were real concerns for Assange’s mental health, risk of suicide in the US, and the inability of the authorities there to prevent it. “I have decided extradition would be oppressive by reason of mental harm and I order his discharge,” she ruled.

The judge rejected defence claims, and widespread human rights concerns, that the case was a political attempt to muzzle the press , and found that on the substantive grounds US prosecutors met the tests for Assange to be extradited for trial. The US has 14 days to appeal; Assange is likely to remain in Belmarsh jail in the interim.

The 49-year-old faces an unprecedented 18-count indictment under the Espionage Act over the hacking of military databases and publication of thousands of classified documents in 2010 and 2011 and faces a possible 175 years in jail. The US claims the leaks broke the law and endangered lives, but they exposed serious abuses by the military in Iraq and Afghanistan. There is no public interest defence under the Act.

Assange insists he is a journalist not a spy and denies plotting with US defence analyst Chelsea Manning to crack an encrypted password on US department of defence computers. He says there is no evidence that anyone’s safety was put at risk. He has fought a long campaign against being brought to the US, including years spent in asylum in the Ecuadorian embassy in London

Giving evidence for the defence, Daniel Ellsberg, the whistleblower whose leak of the Pentagon Papers exposed the US government’s actions in the Vietnam war, testified: “The American public needed urgently to know what was being done routinely in their name, and there was no other way for them to learn it.” Extradition would be a threat to freedom of the press internationally. Incoming US president Joe Biden should reconsider this dangerous prosecution.