The Irish Times view on tensions between the US and China: Speaking up on Hong Kong 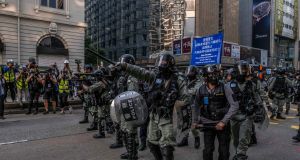 Since the current round of protests began in Hong Kong six months ago, public signals of support from the Trump administration for the demonstrators have been pointedly withheld. The silence emanating from Washington was consistent with the behaviour of a US president whose interest in defending liberal values is far outweighed by his strange affinity for strongmen and despots. During the summer, it was reported that Trump had promised Xi Jinping of China that Washington would tone down its criticism of the country’s handling of the protest movement to revive stalled trade talks.

It is encouraging, therefore, that Trump last week signed into law legislation that amounts to a declaration of support for the protesters. The Human Rights and Democracy Act, which won bipartisan approval in Congress, requires the US state department to certify at least once a year that Hong Kong retains enough autonomy to justify favourable US trading terms, and threatens sanctions for human rights violations in the city. Trump signed a second Bill that blocks new export licences for tear gas, rubber bullets and handcuffs being sent to the Hong Kong police.

Beijing’s response will not deter the protesters from pressing their reasonable claims. Nor should it stop the international community from making its voice heard

These moves were overdue and grudging – Trump, apparently still torn over what should have been a straightforward decision, insisted that the Bills were signed “out of respect for President Xi, China and the people of Hong Kong.” But they should provide a fillip to those Hong Kongers engaged in peaceful protest for their legitimate aim: holding China to the “one country, two systems” principle it agreed at the 1997 handover of the territory.

China, always hyper-sensitive when foreigners observe that it is repressing its own people, said it would retaliate by suspending US navy port calls to Hong Kong. It also announced a plan to impose sanctions on four US-based NGOs, including Human Rights Watch and Freedom House, which it claimed had supported violent protests in the city. Beijing’s response will not deter the protesters from pressing their reasonable claims. Nor should it stop the international community from making its voice heard.

1 All students will not return to school even if social distancing rules are relaxed – McHugh
2 Trump says, ‘I have the best words.’ Now this comedian’s going viral for lip-syncing them
3 What do you do when you meet a bear on a walk? Copy this 12-year-old
4 We need to pay very close attention to what is happening in Britain now
5 Emily Maitlis thanks BBC viewers for support after Cummings row
Real news has value SUBSCRIBE