The Liberal Democrats held seat in Brecon and Radnorshire is a major target for the Conservative party in the upcoming UK election. Video: Enda O’Dowd 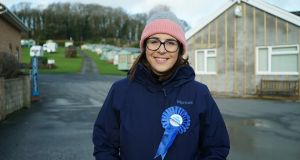 Aside from the breath-catching scenery, two things stand out driving from England into the Welsh constituency of Brecon and Radnorshire: the Tories really want to win here and some people really want to stop them.

Election posters promoting first-time Tory candidate Fay Jones line hedgerows, far more than is usual in a rural constituency like this. Approaching Brecon from Hertfordshire, a large number of Conservative posters have been defaced in this Liberal Democrat-held constituency. One was covered with a red spray-painted “No”.

This constituency has flipped between Conservatives and Liberals since 1979; Labour does not figure here in general elections.

On a chilly, wind-swept Sunday morning in Bronllys – a village on the edge of the Brecon Beacons, a national park and a hillwalkers’ utopia – Jones is a little apprehensive as a middle-aged man approaches.

She is canvassing the village in a final push for votes ahead of Thursday’s general election.

“Are you the Conservative candidate?” the man asks the 34-year-old political lobbyist from Cardiff who previously worked for Prince Charles.

She is, she tells him.

He holds out his hand to shake hers and says he will be voting for her.

Temperatures are a bit high, so I think the sooner we get this election out of the way, the better,

Not all people have been so pleasant in this campaign. Jones had intruders in her garden at home while she was away who ripped out campaign signs.

“That’s a bit scary,” she said. The police have been “absolutely fantastic”.

“It is very unsettling particularly as I live on my own,” she told The Irish Times.

Canvassers do not go out alone during this election.

“Temperatures are a bit high, so I think the sooner we get this election out of the way, the better,” she said.

This marginal Welsh constituency is roughly the size of Luxembourg and the biggest by area in England and Wales. Sheep outnumber people in these hilly parts by about 10 to 1.

It is a key Conservative target as Johnson aims to win a parliamentary majority with a pledge to deliver Brexit. That message should play well in an area that voted marginally (52 per cent) to leave the EU.

Brecon is high on Johnson’s list. He passed through here last month and sheared a sheep at an agricultural fair he attended with Jones. She knows Johnson well, having co-ordinated his leadership campaign in Wales.

The constituency has not been good to him. In August, voters here cut his majority in parliament to one in a byelection when Liberal Democrat Jane Dodds overturned a 8,038 majority to beat Conservative MP Chris Davies by 1,425 votes. The election was called after Davies was convicted for submitting a false expenses claim.

Jones appears to have drawn a line under that controversy. On paper, she has a very strong chance of becoming the first female Conservative MP elected from Wales. The Brexit Party, which won 3,331 votes in the byelection, stood down in this constituency, so the Tories, promising Brexit, will be the likely beneficiaries.

Even in a marginal Brexit remain-leave constituency, Jones, who voted to stay in the EU, believes that some remainers will back her as they want to conclude the UK’s labyrinthine exit from the bloc.

“I am finding so many people like me, who voted remain, who just want to see it delivered, who want to make progress, who are sick and tired of the fact that we have wasted 3½ years,” she said.

“I am finding that it is pretty overwhelmingly a leave constituency now.”

Voter fatigue, over Brexit and elections in general, could suppress turnout, which makes this close race even more unpredictable. One electoral area, Brecon St Mary’s, has had nine elections since 2017.

Dodds, the leader of the Welsh Liberal Democrats, dismisses the Tory promise to deliver Brexit quickly. Standing on the banks of the river Usk, the Lib Dem says that only stopping Brexit “will happen overnight”.

“The Conservatives are very dishonest when they say get Brexit done because it won’t get done. It absolutely won’t and Brexit will continue to dominate our media, our politics for time immemorial,” she said.

It is absolutely critical if people want to stop Brexit, that they vote Liberal Democrats

Dodds hopes she can benefit again, as she did in the byelection, from the “remain alliance” with Plaid Cymru and the Greens pulling out to send an anti-Brexit MP back to Westminster.

“The small parties have to work together. It is about adult grown-up politics in this first-past-the-post system. We all want it to change, so that we can have a much better voting system. But until then, and for this election, what we are saying is that we are going to be working together,” she said.

“It is absolutely critical if people want to stop Brexit, that they vote Liberal Democrats and we get more remain MPs in order to have a second referendum.”

In Brecon, this election has left voters conflicted by Brexit’s rupturing of traditional party allegiances.

“I don’t want to be a tactical voter. I want to vote with my heart,” said Labour supporter and remainer Gillian Beedle who voted tactically in 2010 for the Lib Dems but then “they jumped into bed with the Tories”.

Wandering around Brecon’s Toy & Train Sale in the town’s market hall with her husband and son, she says she comes from a former mining town in the north of England and is “vehemently against the Tories”.

“I have voted tactically in the past and it has not worked out well. I said I would never do it again for that reason,” she said.

She despairs that Labour doesn’t get a look-in here – and about politics in general.

“The whole political system in the UK at the minute is a mess. The situation we are in with Brexit is a mess. I don’t know how it is ever going to be sorted out,” she said.

In Bronllys, friends Dawn Murray and Deb Ballinger stroll through the village early on Sunday morning. They differ politically both on Brexit and on this election.

As friends maybe all with different opinions and with feet in the camps of all the parties, we are trying not to let it interfere with how we discuss politics

Murray voted to leave the EU and has already backed Jones by postal vote; Ballinger is a remainer and is voting liberal on Thursday. They are out delivering Christmas cards to neighbours to save on stamps and “to show how united we are”, says Murray with a laugh.

Not all friends, or even families, are so close. In this divided area, Murray knows of older remainer farmers whose children are leavers. Ballinger says she has a Brexiteer friend who has fallen out with his remainer son.

The two women try to rise above the Brexit divide.

“As friends maybe all with different opinions and with feet in the camps of all the parties, we are trying not to let it interfere with how we discuss politics,” said Murray.

“It is only a small part of life, Brexit.”