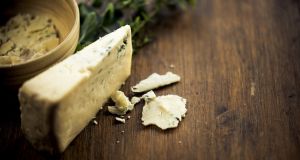 Modern blue cheeses have a fungus added to produce the veining. But historically, insect larvae were part of some cheese-making processes.

You might remember a British politician named Shailesh Vara, the Conservative MP for North West Cambridgeshire. Or maybe not.

He briefly threatened to make headlines here a couple of years ago when becoming junior minister in the Northern Ireland office. But the first I heard of him, somehow, was when he resigned the job in protest over Theresa May’s Brexit plan. And even that might have been like a tree falling in a distant forest had he not announced it on Twitter.

Anyway, he was in the news again in Britain this week on a not (as he thought) unrelated issue. It so happens that he represents the village of Stilton, which despite being synonymous with the famous cheese, is not allowed to make it, or at least to market its cheeses under that name.

So naturally Mr Varesh blamed this on EU rules. And as quoted by a supportive Sun newspaper, he looked forward to liberation from the ban, post-Brexit: “It’ll put Stilton on the global map.”

This was reminiscent of the sort of thing the Daily Telegraph used to write about so entertainingly, especially back when it had a young Brussels Correspondent by the name of Boris Something-or-other (whatever happened to him?).

Unfortunately, as was often the case then too, the EU tyranny being complained of was fictional. As the Telegraph itself reported on Thursday, it was the High Court of England, in 1966, that restricted production of Stilton to three counties – Leicestershire, Nottinghamshire, and Derbyshire – none of which include the eponymous village.

That followed decades of lobbying by the Stilton Cheesemakers Association, founded in 1936. EU protection of food names had since merely confirmed the British law, which an expert now says has “zero” likelihood of being overturned, Brexit or no Brexit.

The problem of Stilton-the-village is that, although it gave its name to the cheese, it may never have done anything more than sell the product.  Even if it did also produce it once, the industry has long been concentrated elsewhere, in the counties aforementioned.

By seeking legal protection in 1966, the makers there warned there was a “real danger of Canadian or Danish Stilton” appearing on the market. But in the process of preventing that horror, a Stilton Stilton was ruled out too.

In any case for overturning the ban, the locals could probably call Daniel Defoe as a witness. The village’s association with the product was already well established when he stopped there once, in 1724, and recorded the following:

“We pass’d Stilton, a town famous for cheese, which is called our English Parmesan, and is brought to the table with the mites, or maggots round it, so thick, that they bring a spoon with them for you to eat the mites with, as you do the cheese.”

Nowadays, that might pass for sarcasm, in a review of a restaurant with bad hygiene.  It wasn’t then. Modern blue cheeses have a fungus added to produce the veining. But historically, insect larvae were part of some cheese-making processes. Even in very recent times, the island of Sardinia had a delicacy called Casu Marzu, served with the working larvae still on site.

Daniel Defoe’s review in turn sent me rereading one of George Orwell’s more courageous essays, In Defence of English Cooking (1945), in which he faced down the international consensus about his country’s cuisine and argued that, really, it wasn’t all bad.

His main tactic was to remember trips abroad, and the foods he missed while there, which included “kippers, Yorkshire pudding, Devonshire cream, muffins, and crumpets”. Then there were the English cheeses: “There are not many of them, but I fancy that Stilton is the best cheese of its type in the world, with Wensleydale not far behind.”

It must be noted that the boundaries of Orwell’s England, or even of his “abroad”, are slippery. His defence of English food also extends at different points to the food of “the English-speaking countries” and of “these islands”.  Hence his proud inclusion in the list of defence exhibits as “haggis” and “Dublin prawns”.

Oh well, we probably can’t complain about the misappropriation of Dublin Bay Prawns since, among other things, they’re not really prawns – they’re miniature lobsters.  Also, they’re not unique to Dublin Bay.

They’re found all along the east coast and far beyond, as was pointed out in 1996 when the EU listed foods deserving of name protection.In Scandinavia, the same species is called Norway Lobster. In France, it’s Langoustine. Indeed, it may now be Langoustine in many Dublin restaurants too. You might even have to pay extra for the translation.

1 Q&A: How long could it take to form a new government after Election 2020? Could things get messy?
2 David Baddiel comes to Ennis to meet a Holocaust denier
3 Love Island tribute to Caroline Flack hides the truth
4 Two Irish passengers on cruise ship test positive for coronavirus
5 €35,000 a bottle: most expensive Irish whiskey goes on sale today
Real news has value SUBSCRIBE