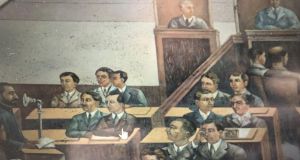 Near the altar of Holy Trinity Cathedral in Addis Ababa is a secular portrait depicting a session of the League of Nations in 1936. The focus of the picture is an address by Emperor Haile Selassie. But in the background, looking on, is de Valera.

Eamon de Valera may have a mixed reputation in Ireland, the country he dominated for so long. But he holds an exalted place – literally – in Ethiopia, thanks to one of the more unusual memorials you will ever see in a church.

Near the altar of Holy Trinity Cathedral in Addis Ababa, amid the standard religious iconography, is a secular portrait depicting a session of the League of Nations in 1936.  The focus of the picture is an address by Emperor Haile Selassie, appealing for help against the occupation of his country by Italy.

But in the background, looking on, is de Valera. And it’s apt that he should share the limelight, because even if it proved to be to the League’s ultimate failure, the “Abyssinia Crisis” was among his finest hours.

Although both sides in that conflict claimed provocation, the Italian invasion of 1935 had been a fairly naked attempt by Benito Mussolini to extend his colonial interests in Africa and increase the prestige of his fascist regime

It was widely condemned and sanctions were imposed. But the sanctions were weak, deliberately. The cynical self-interest of the great powers, including France, Britain, and the US, effectively connived in allowing Italy’s aggression to stand.

Mussolini was not without supporters in Ireland either.  One Dáil TD, Paddy Belton, wondered why Catholic Italy should suffer for its actions against “slave-trading savages”. The Blueshirt Eoin O’Duffy even offered to send Mussolini troops.

De Valera, by contrast, was an ardent supporter of the League of Nations and its role in defending small states against the mighty. Soon after becoming president of the Dáil in 1932, he had astonished the assembly in Geneva by the frankness with which he criticised its inaction after Japan’s invasion of Manchuria.

Now, on the eve of Italy’s invasion, he warned: “The final test of the League and all it stands for has come.” Not only did de Valera support stronger sanctions, he argued that if these were not successful, they should be backed with military action. Ireland would contribute.

His straight talking earned him the criticism of Anthony Eden, Britain’s then-foreign secretary, who called him a “firebrand”. But in any case, the appeals for international action failed. As darker events loomed in Spain and Germany, de Valera drew a famous conclusion.

“All the small states can do”, he warned in 1936, “if the statesmen of the greater states fail in their duty, is resolutely to determine that they will not become the tools of any great power, and that they will resist with whatever strength they may possess every attempt to force them into a war against their will.”

The Irish Times, by the way, not always an admirer, supported his stance throughout the crisis. And a few years afterwards, when an Italian general’s memoir made clear just how calculated the invasion had been, the newspaper returned to the subject.

First it quoted an English review, which said that the book “makes British apologists for Italy’s action look peculiarly silly”. Then it added: “Unhappily, there also were Irish apologists who will look even sillier; and the people of this country in the future will have all the more reason to be proud of the stand that was taken at Geneva by President De Valera.”

The Holy Trinity Cathedral was built to commemorate Ethiopia’s subsequent liberation, which became a subplot of the second World War. It’s the burial place of many of those killed in the struggle.It also holds the tomb of Emperor Selassie, who returned from exile to rule the country for most of his remaining years.

In the adjoining churchyard, meanwhile, is the grave of another honoured foreigner Sylvia Pankhurst, suffragette and communist. She and de Valera make odd companions, but thanks to Ethiopia, they had at least one thing in common.

In contrast with her better-known mother and sister, Sylvia Pankhurst was a peace activist who had been horrified by their support for the first World War. She too championed Ethiopia against Mussolini and spent her last years living there, as the emperor’s friend.

Supposedly descended from King Solomon, Haile Selassie was considered a messiah by some, notably the Jamaican Rastafari movement, including Bob Marley (whose song War was partly inspired by his speeches).

His popularity waned in later years, however, and he was eventually deposed in a military coup.

By an odd coincidence, both his and de Valera’s long lives ended in the same week of 1975. The former taoiseach died peacefully on August 29th. Two days earlier, the deposed emperor succumbed to what was described as respiratory failure. That was one way of putting it. It later emerged he had been strangled.