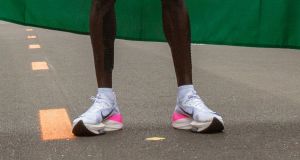 The north Dublin suburb of Raheny used to have an ancient holy well. It was called St Anne’s, like the modern-day park there. And it must have been the scene of many pilgrimages, perhaps even miracles, in its time, although it has long since dried up, with its source unknown.

Nowadays, the main influx of pilgrims to Raheny is on the last Sunday of January every year, when thousands flock to the village for an annual five-mile road race. One of the most popular events of its kind, it draws everyone from the athletic elite to running’s recent converts, whose New Year fitness resolutions are still just about holding.

But in the continued absence of St Anne’s Well, the religious aspect of this year’s event was supplied instead by a Greek goddess, Nike, or at least by the shoe company named after her. Nike was also known as “Winged Victory” to the Greeks, for whom she personified sporting success. And reports from abroad of miraculous performances associated with one of her footwear products, the “Vaporfly”, including the first ever sub-two-hour marathon last October, had persuaded most of the top runners in Raheny to wear them this year.

Sure enough, the results were prodigious. The first 10 men home all beat the winning time from last January. That was by local star Mick Clohisey, an Olympic marathoner who was competing again and who also ran faster than in 2019 but could only finish eighth.

I wasn’t surprised to hear afterwards that an early leader, John Travers, unused to the new shoes, found his feet overheating uncomfortably at one point. Fire extinguishers were not required, happily, but he did have to stop to take a sock off, which cost him 15 or 20 seconds and the race.

Not the least remarkable result was by that most hardened of veterans, Tommy Hughes, a former Dublin City Marathon champion now aged 60, who ran the five miles in 25.57 – just behind overall women’s winner Fionnuala McCormack – a world record for his cohort.

Of course, all this elite action was a mere rumour from the part of the race in which I participated. That was even farther from the front than usual. The biggest-ever field meant that I couldn’t hop across the barrier at the start, as planned, and insinuate myself into the crowd just behind the proper runners.

So even if I had been wearing the €250 supershoes, they wouldn’t have been much use in the first mile or so, through the narrow streets of Raheny’s Latin Quarter, when I was stuck in dense human traffic. Never mind shoes. It was Nike’s wings – which she was unusual among Greek goddesses in retaining into classical times – I would have needed.

Anyway, by the time I finished, the ethics of the Vaporfly were being hotly debated around Dublin 5, as they have been elsewhere. A decision by World Athletics on whether to ban them is imminent. More likely, authorities will just curtail developments of the technology pending more study.

In the meantime, the worldwide spread of the cult must be causing panic among other shoe companies. At the New Year Ekiden in Japan – a long-distance relay event between professional corporate teams, which draws huge crowds and live TV coverage for two days – 84 per cent of competitors wore the Vaporfly.

Among the resultant losers were Japanese brand Asics, who saw only seven runners wear their product this year, compared with 51 in 2019. The company’s shares fell sharply.

We’ve come a long way since the Rome Olympics of 1960, when Abebe Bikila won the marathon in bare feet. Four years later, he won again in Tokyo, this time wearing sponsored runners, whether he needed them or not. Since then, there has been a constant race to optimise the padding of shoe soles – although the Vaporfly’s use of carbon plating also seems to be crucial – for speed.

And yet one of the things noted by veterans of Raheny was that this year’s winning time did not quite break the record for the 36-year-old event. On this, it should be noted that part of the race route changed a few years ago, so it’s no longer completely comparable.

But the new course eliminated an infamous uphill finish, which was hardly quicker, and on which the record was set in the 1990s. This may be in keeping with a general phenomenon whereby, outside the global elite, runners today struggle to match the times of generations past.

There are many possible reasons. One is that, whatever about their shoe soles, people may have been less expensively padded back then.