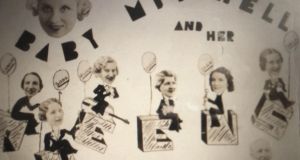 Apart from the road in Ballyfermot and the townland in Swords, as mentioned yesterday, it seems that the Battle of Cremona (1702) may also once have been commemorated by a popular Dublin music group, the Cremona String Band.

As reader Des Gunning tells me, they were a well-known feature in Phibsboro during the earlier part of last century.  And the name was later carried on by a son of the band’s founder, Edwin Mitchell, who then formed a group called the Cremona All-Girls Band (or Orchestra), advertised on a fading plaque outside his house until at least the 1980s.

Whether the Cremona String Band was named after the Irish brigade’s heroics in War of the Spanish Succession, I’m not certain. The inspiration might equally have been Cremona’s famous instrument making tradition.

That included the great Stradivarius, whose golden period, by the way, was from 1700 to 1720, and who must therefore not have been unduly disturbed by the Franco-Austrian struggle for his city, in which the Wild Geese became so entangled. But the Dublin band was founded in 1910, not long after Arthur Conan Doyle revived memories of the battle in verse. So perhaps it was a bit of both.

Another feature of Phibsboro in their time was the train station at Broadstone, fed by the Midland Great Western Railway. That closed in 1937. Until then, the band had found it profitable on occasion to busk there, not just for any immediate returns, but to advertise their availability to the Big House set in the countryside served by the railway, including the likes of Lord Longford.

Other promotional measures included a small ad in The Irish Times a few years later for Edward’s ensemble. That did not sell them short either. They were described then simply as “Edwin Mitchell’s famous Girls’ Band” and as a “stupendous attraction”. For anyone who booked them, “a good night’s dancing” was guaranteed.

They featured also in a 1942 report by this newspaper for having played at a children’s fancy dress competition in the Gresham Hotel, in aid of the RNLI. This now evokes a lost world.

Winners included a “Best Toddler (under 4)”, who was dressed as “Marie Antoinette”. But from the vantage point of the 2020 general election campaign, the most striking surname in the competition may be the winners of the “Best Pair” category: “Anne and David Boyd Barrett”. They were dressed as Red Riding Hood and – perhaps aptly – Robin Hood.

The most successful of the Mitchell family musicians was not Edwin, however. It was his sister Alexandra, or “Zandra” for short. Not was it for strings she was celebrated, although she did play violin, but for the saxophone, of which she became Ireland’s first female star.

Born in 1903, she performed all over the world in the 1920s and 1930s, first in other people’s groups. then her own, “Baby Mitchell and the Original Queens of Jazz”, while playing alongside some of the jazz greats, including Coleman Hawkins and Django Reinhardt.

Having settled in Germany during the 1930s, she also spent the war there, one of only 40 Irish citizens to do so. But in 1945, she needed a marriage of convenience to a Belgian to get out of it and escape the advancing Russians.

Later, she moved back to Ireland and the family’s holiday home in Donegal, near Rossnowlagh. The house already had storied connections – via another Mitchell, confusingly – the unrelated Margaret, who had stayed in it when it was a hotel and may even have written part of Gone With the Wind on the premises.

Zandra Mitchell lived there into both hers and the century’s nineties. International stardom was a distant memory by then.

Indeed, she became something of a recluse in the end, sleeping in the basement (or by some accounts bathroom) of a house that had also seen better days.

It has since been much refurbished, making periodic appearances in the property pages, most recently in 2018.  In the meantime, Zandra Mitchell’s extraordinary story has also been rediscovered and renovated. It was the subject of a 2016 radio documentary on Lyric FM, Zandra: A Sentimental Journey, by Donegal man Marc McMenamin.

Since then, it has also inspired a theatrical tribute – Zandra, Queen of Jazz – written (with “some poetic license”) and performed by Roseanne Lynch, with music by Richard Lennon. That show sold out on its original run in Dublin’s Smock Alley Theatre last year. It returns there this week, running from February 2nd to 4th.