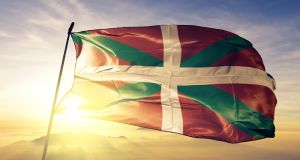 “If the Basque flag is not widely adopted by Mayo supporters, despite the coincidence of colour schemes, that may be due to a structural problem.” Photograph: Oleksii Liskonih/iStock

When Meath host Mayo in GAA’s National Football League this weekend, it’s possible that the home supporters may still include a few Fifth Columnists, secretly cheering for the visitors.

If so, those are likely to be part of, or descended from, the Connacht settlers who made a great trek eastward in the 1930s, encouraged by Éamon de Valera and the Land Commission, to sow their seeds in the Royal County.

But in the same era that brought those Mayo people east, by coincidence, Meath also became home to another group of political exiles whose flag is green and red. In that case it was a community of Basque nationalists, forced out of Spain by Franco.

Central to their number was the Gallastegi family from Bilbao, who fled that city in 1937 after the bombing of nearby Guernica. The family patriarch Elias Gallastegi had long been an admirer of Ireland, and especially of the 1916 Rising. Now, for a few years, he would make his home in Gibbstown, or “Baile na Ghib” as it had become known under another de Valera project, in which relocated Irish speakers from Donegal to Kerry (Mayo again included) were establishing a Meath Gaeltacht. In moving there, Gallastegi joined one of his business associates, Ambrose Martin, an Argentinian-born of Basque and Irish parentage, who ran the Irish Iberian Trading Company. After Ireland’s 1920s Brexit and the Economic War that followed, Martin’s business was building new trade links between this island and the Spanish speaking world, of which Gallastegi’s Bilbao company had been part.

But not everybody in Ireland was pleased about such links. In a Dáil debate of 1937, an avowedly Fascist Fine Gael TD Patrick Belton had described Martin as “one of the most pronounced and prominent communists in this country” and accused him of “feeding the red soldiers of anti-Christ in Spain”. In any case, as Stewart Reddin, who has published a short history of the group on the website medium.com, explains, the Basques in Meath were soon multiplying. One day in 1940, a French lobster boat landed in Cobh with 11 more refugees, after a week-long journey that had first been bound for England until they changed their minds.

The 10 men and one woman included “a stockbroker, a doctor, three merchants, a topographer, an engineer, a pilot, a sea captain, and a naval officer”. But several were also prominent Basque nationalists. And although these too had fled Bilbao in 1937, for French Basque country, the Nazi occupation meant that France was no longer safe. So now they too joined the community at Gibbstown.

The government here would probably have preferred them to go to England, or indeed to anywhere else, because their presence here caused tensions with the Spanish government, still considered a friendly state then, Franco or no Franco.

Military intelligence, meanwhile, was even more uncomfortable about their politics, warning the minister for external affairs that it was “extremely dangerous to have them at large”. Ireland had recognised the new Spanish regime’s legitimacy, a memo added, “and any mischief plotted by our latest visitors is likely to have serious repercussions”. The government granted them political asylum, despite this. And by 1942, Army intelligence had grown relaxed about their presence. They might be hostile to Franco, another report noted, but they were not “Red” in the communist sense. Furthermore, they were “on good terms with various clergy”.

The red part of the Basque flag has indeed nothing to do with socialism. Nor is the green bit overtly political. This is in contrast with the Mayo GAA standard, which was inspired by Thomas Davis’s ballad exalting “the green [of Ireland] above the red [of England]”. If the Basque flag is not widely adopted by Mayo supporters, however, despite the coincidence of colour schemes, that may be due to a structural problem: its design is very similar to the Union Jack.

Getting back to the Gallastegis, they did their best to blend in during their years in Ireland, which, after a move to Dublin, lasted into the early 50s. The children played Gaelic games here, took part in feiseanna, and learned Irish themselves.

But their most notable sporting success seems to have been in a code little played in Meath. As a student in Blackrock College, one Lander Gallastegi excelled at rugby, becoming school captain. And in 1945, after leading his team to a 3-0 win over Clongowes, he was on the receiving end of one of the more eccentric traditions in Irish sport when, as usually happens to the winning captain, his mother presented him with the Leinster Schools Junior Cup.