Coronavirus crisis has been exacerbated by rise in authoritarianism and nationalism

When multilateral action is needed, xenophobia and self-interest is driving the response 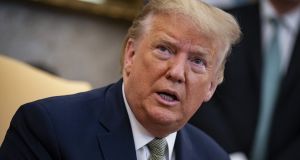 US president Donald Trump: The Centers for Disease Control and Prevention has had its budget cut by 10, 19 and 20 per cent over the last three years as part of Trump’s deregulatory crusade. Photograph: Al Drago/Bloomberg

The coronavirus crisis dramatises conflicting values in the globalised, capitalist world it has so rapidly traversed.

Policy action to confront the virus is suffused with debates about collective and social versus individualised, and about market controls, regulation and solidarity.

Quarantined production and consumption has cleared skies and freshened air in the industrialised parts of China where the virus originated, reminding us of the greater struggles to come against climate breakdown.

US president Donald Trump’s reference to a “foreign virus” as he imposed a ban on air travel from Europe, plus his renewed call for a wall in response to a tweet on a “China virus”, exemplify xenophobic versus multilateral action to tackle it.

The virus triggered the biggest falls on stock markets since the 2008 crash and the largest fall in oil prices since 1990, raising questions about what is driving current share values, debt levels and energy policies.

We have heard little so far from the least-developed world, where weaker medical systems may be overwhelmed

Expertise, institutions and regulation matter, writes the US economist Joseph Stiglitz in response to conflicts of values over the virus with Trump’s White House. The United States’ Centers for Disease Control and Prevention has had its budget cut by 10, 19 and 20 per cent over the last three years as part of Trump’s deregulatory crusade, while the National Security Council’s global health security and biodefence unit was abolished. The US therefore lacks the capacity to test the demographic penetration of the virus, unlike South Korea and elsewhere.

Contrasting ideological attitudes to expert advice, medical systems and regulatory frameworks are reopened and exposed as the most capitalist developed states and the less-developed authoritarian ones such as China respond to the crisis. There is a greater need for and emphasis on individual actions to control the virus in the containment and delaying stages of this response, and on collective action and solidarity when mitigation applies. But publicly funded research is necessary all through, just as is a functional framework of regulation to guide medical systems through all these phases.

We have heard little so far from the least-developed world, where weaker medical systems may be overwhelmed if it takes hold. This poorer half of the global population already bears the main burden of climate breakdown. Mary Robinson asks how urgency attending the virus can be transferred and applied to that far greater problem.

Giving a lecture in her honour this week in Ballina, Co Mayo, the former head of Amnesty International Kumi Naidoo argues there is a convergence of interconnected crises at present including climate disruption, increasingly authoritarian rulers, massive growth of oligarchic wealth and xenophobia. The global capitalist system and an associated pathological illness called “affluenza” is the biggest threat to humankind rather than coronavirus or flu, he believes. Yet he is hopeful that change is possible, triggered by a greater realisation of the threats posed to human survival.

From another angle, the Dutch trend forecaster Li Edelkoort believes the coronavirus epidemic will lead to “a global recession of a magnitude that has not been experienced before” but will eventually allow humanity to reset its values. A “quarantine of consumption” will have a profound cultural and economic impact “where we will learn how to be happy just with a simple dress, rediscovering old favourites we own, reading a forgotten book”.

She adds that the “recent pictures of the air above China showed how two months without production cleared the skies and allowed people to breathe again”.

In a similar vein, the evolutionary biologist Rob Wallace insists we should look into the origins of the virus in a highly industrialised and monopolised livestock production system that encroaches more and more on the world’s remaining primary forest and smallholder-held farmland. In his book Big Farms Make Big Flu he explores how that happens and warns such previously boxed-in pathogens will recur because they are spilling over into local livestock and human communities.

The current state of politics and geopolitics has exacerbated, not stabilised, the crisis

Chlorinated chickens are precisely at stake in Donald Trump’s trade war with the European Union and in Boris Johnson’s desired UK-US trade deal to offset Brexit. Trump needs foreign scapegoats to frame this and deflect attention from reduced medical capacity and collapsing equity values at home which may imperil his re-election.

Thomas Wright and Kurt Campbell of US research group Brookings contrast this with the effective multilateral action taken by the Obama administration in 2008 to head off capitalist recession. As they observe: “Over the past decade, the world has grown more authoritarian, nationalistic, xenophobic, unilateralist, anti-establishment and anti-expertise. The current state of politics and geopolitics has exacerbated, not stabilised, the [virus] crisis.”