Does a ‘caretaker’ Taoiseach really have the authority to lock down the country?

International or even national events, or natural disasters, are not going to be postponed pending the formation of a Government in Dublin 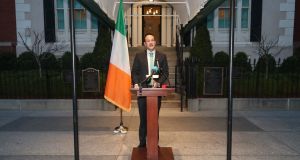 Taoiseach Leo Varadkar at Blair House, Washington DC, during a press conference where he announced that all schools, colleges and childcare facilities in Ireland will close until March 29 as a result of the Covid-19 outbreak. PA Photo. Picture date: Thursday March 12, 2020. Niall Carson/PA Wire

On the 20th of February the Dáil failed to elect a Taoiseach. Leo Varadkar travelled to Áras an Uachtaráin that afternoon to submit his resignation in conformity with the Constitution. Today he announced wide ranging restrictions on public association and the closure of all schools and colleges.

The problem with the terms “caretaker Government” or “caretaker Taoiseach” is when they are taken to mean that a “caretaker” Taoiseach and Government are creatures of diminished standing or authority under the Constitution; reduced to the role “constitutional night-watchmen” in the words of Gerard Hogan, currently an Advocate General at the European Court of Justice. They plainly are not.

It also holds that the members of the Government in office at the date of a dissolution of Dáil Éireann “shall continue to hold office” until their successors shall have been appointed.

The phrase “shall continue to carry on their duties” is striking. Imagined it as uttered in the thin voice of Eamon De Valera as promulgator of the Constitution, or indeed as a phrase spoken by his predecessor as President of the Executive Council W.T. Cosgrave; the phrase has a certain ring of understated forcefulness that is lacking in the term that appears in the more formal “shall continue to hold office”.

As we can see only to clearly from the current coronavirus crisis, international or even national events, or natural disasters, are not going to be postponed pending the formation of a Government in Dublin.

Ireland as a State must be able to respond to events, and that response is through Government. The need to have a Government and a Taoiseach continue in office until the Dáil is able to replace them is far from an academic point where there is an imperative necessity to act on coronavirus, and perhaps also as Brexit enters its implementation phase, and to have the authority to do so.

A separate question that has been rehearsed is whether a Taoiseach, in Mr Varadkar’s position, still has the power to request from the President a fresh dissolution of the Dáil to address an impasse created by the failure of the Dáil to appoint his or her successor.

Dáil deadlock in the immediate aftermath of a general election on the vote for Taoiseach is of course a real possibility. In 1937, the year of the Constitution’s enactment, it was seen as something that could arise, if it was scarcely expected to be of frequent occurrence.

It has now been the norm of the last two general elections in Ireland. The Constitution has endured because it intelligently interpreted and honourably applied the underlying scheme of the Constitution and is highly efficacious. There is no constitutional basis for the idea that a “continuing” Taoiseach would not have the power to ask the President for a fresh dissolution of the Dáil.

It could hardly be emphasised that it is a matter for the discretion of the President whether to grant the request of a Taoiseach to dissolve the Dáil. The underlying idea is that if a Taoiseach were acting in bad faith in exercising his or her constitutional function - most obviously by seeking a dissolution to pre-empt further attempts to elect a successor as Taoiseach and force a general election - then the President would refuse the Taoiseach’s request. The decision is in the President’s absolute discretion. It is a supremely political judgment, and one that could scarcely be justiciable.

In a situation of deadlock in the Dáil in the aftermath of a general election, the choice lies between persisting in attempts to form a Government and elect a Taoiseach, and a general election. There is a creative tension between these two courses: the wish to avoid a general election is likely to work as a stimulus to the formation of a Government. That being so, quite apart from the fact that such a delimitation on the authority of a continuing Taoiseach is not prescribed by the Constitution itself, it is difficult to see the political logic of denying a Taoiseach continuing in office the entitlement to ask the President to dissolve the Dáil. The idea of the members of Dáil Éireann finding themselves constitutionally obligated to agree the election of a Taoiseach whose sole mandate is to advise the President to dissolve the Dail - advice the President would be obliged to act upon because it was not the advice of “a Taoiseach who has ceased to retain the support of a majority in Dáil Éireann” owes more to Sartre than de Valera.

Political convention and the role of public opinion may weigh on a Government which has not secured immediate re-election by the Dáil following a General Election, and may of course curtail the freedom of initiative of that Government.

At least from a constitutional prospective, there is a point at which the reiteration of the epithet “caretaker” becomes a distraction. It is not a constitutionally-sanctioned term. A country has a Government or it has not. The idea of a Taoiseach is, advisedly, a unitary concept.

Frank Callanan is a Senior Counsel. He was chair of the trustees of Fine Gael 2013-2018.

1 US election: ‘Trump would not be caught dead here unless he wanted our votes’
2 The real Contagion virus is out there and it’s causing virologists to worry
3 ‘Attention-seeking’ Shane Ross has a spiky joust with Regina Doherty
4 First full moon on Halloween night since 1955 will be rare ‘blue moon’
5 Storm Aiden prompts nationwide weather alerts for Halloween
Real news has value SUBSCRIBE