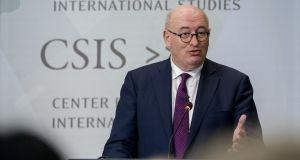 European Union trade commissioner Phil Hogan: Ireland’s shifting position in the transatlantic setting makes it vital to have him in such a pivotal role. Photograph: Andrew Harrer/Bloomberg

“But trade is more than simply the exchange of goods and services. It is also a strategic asset for Europe. It allows us to build partnerships, protect our market from unfair practices and ensure our values and our standards are respected.”

European Commission president Ursula von der Leyen’s appointment letter to Phil Hogan contains this reflection on the expanding role of his trade portfolio. He told the annual meeting of Irish diplomats this month his mandate to deal with the United States, China, reform of the World Trade Organisation (WTO), Africa and Brexit puts trade at the heart of world politics.

Trade is not only about market access and business but concerns climate, gender, child labour, torture, state aid, labour and environmental standards too. In her letter, von der Leyen insists that “Europe’s place is at the heart of the rules-based multilateral system” in which “open and fair trade must be based on global rules that are effective, enforceable and create a level playing field for all”.

Hogan was this week in Washington at a critical geopolitical and geoeconomic moment for the future of this system. As he arrived, the US and China announced they had concluded the first phase of their trade deal. The compromise still leaves average tariff levels at 20 per cent, about three times more than two years ago. It does not resolve the fundamental question of whether the US wants to decouple economically from outsourcing manufacturing and trade in China or reconfigure the relationship, as the EU prefers.

Trade is not only about market access and business but concerns climate, gender, child labour, torture, state aid, labour and environmental standards

Alongside this agreement went another between the US, the EU and Japan calling on China to adhere to reformed WTO rules on state aid in its state capitalist economic model. That is part of a wider WTO reform being pushed by Hogan in pursuit of a new appeal system designed to bring China and the US back on side after Donald Trump pulled out of the existing court last year.

Hogan’s effort to “reset” such rules of the trading game illustrate the negotiating skills honed in Irish politics and then as agriculture commissioner widely recognised in US and international commentary. Enlarging an irresolvable problem is a good way to do that. It could head off Trump’s threats to apply tariffs on European cars and respond aggressively to France’s digital tax on US companies, scale back rows over Boeing and Airbus and thereby reopen the way to another transatlantic trade round.

That is all a big ask, particularly in the year when Hogan must also oversee negotiations of an EU trade agreement with the departing UK. It may be too much to expect in a US election year when Trump is tempted to use a US-UK trade deal as a battering ram against EU standards, especially for agricultural goods.

It is more likely to be a bumpy period in EU-US relations, as Hogan’s chief trade official Sabine Weyand, who previously worked with Michael Barnier on Brexit, puts it. Hogan’s frank and blunt criticisms of Trump’s “reckless” approach and the need to see the “error of his ways” on RTÉ after his appointment was announced last September did not go down well in Washington. Nor do Brexiteers appreciate his belief they do not understand how difficult it will be to reach an agreement in one year.

Either way, Ireland’s own positioning in this transatlantic setting is rapidly changing. That makes it important to have Hogan in such a EU pivotal role with the UK and the US. Other contributors to this month’s diplomatic event spoke of the EU’s need to develop a flexible strategic autonomy in security, economics and standards as the US withdraws from transatlantic engagement and loses its hegemony. Trump is more a symptom than a cause of such change. It puts the EU in a race between greater integration and global irrelevance.

Ireland can no longer rely on unqualified support from a US diaspora partially attracted to Trump’s agenda, on the UK as a proxy neoliberal ally in EU policymaking, or for the same solidarity over Brexit from an EU needing to find more variable geometry in dealing with neuralgic issues for us like defence, corporate taxation and agriculture.

All this brings domestic politics and foreign policy issues closely together throughout the EU. Ireland’s political and official leaders did very well on Brexit but now face just as bumpy a ride in its second half. The election campaign is a really good opportunity to talk about these issues – but will they avail of it?

1 Coronavirus: Irish citizens advised not to travel to Italy’s affected areas
2 Bank leaked my loan request to family who tried to rip me off
3 Divisive Leitrim rape case raises questions about future trials
4 Why Sinn Féin will not call the State by its name
5 Maureen Dowd: For the White House parasite, all restraint has gone
Real news has value SUBSCRIBE