World View: The outbreak and its effects dramatise the rise of connectivity 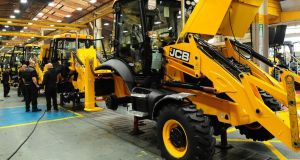 Digger manufacturer JCB, based in Staffordshire in England, is cutting production and is putting its 4,000 staff on reduced working hours from Monday due to the coronavirus outbreak. Photograph: Rui Vieira/PA Wire

The coronavirus crisis in China dramatises how economically connected the world has become since the 1990s. The spread of the virus affects supply chains and just-in-time manufacturing, exports and imports in Asia, North America and Europe, underlining how reliant they are on China.

China is now the world’s second-largest importer and the second-largest economy. The disease’s epicentre Wuhan specialises in car parts and accessories. Many of its factories are closed, affecting Hyundai in South Korea, Fiat in Italy and Volkswagen in Germany.

The cancellation of the mobile world congress in Barcelona this week because of the coronavirus symbolises the crisis. The main agents of global connectivity are the 3.5 billion smartphones owned by 45 per cent of the world’s population in 2020.

Connectivity has been elevated in recent policy analysis to be seen as a key factor in international relations. In its study Connectivity Wars: Why Migration, Finance and Trade are the Geo-economic Battlegrounds of the Future the European Council of Foreign Relations examines how interdependence and globalisation flourished. Rather than abolishing or eliminating conflicts between blocs and the most powerful states, however, tariffs and regulatory rules became weaponised.

As Mark Leonard puts it: “Interdependence, once heralded as a barrier to conflict, has turned into a currency of power, as countries try to exploit the asymmetries in their relations. Many have understood that the trick is to make your competitors more dependent on you than you are on them – and then use that dependency to manipulate their behaviour.”

We see this at play in the US-China relationship and in debates on whether it amounts to decoupling or reconfiguration. Trade negotiations are part of such competition. Economic warfare, weaponising institutions such as the World Trade Organisation and infrastructure competition are distinctive features of our times.

As with globalisation, there is a danger that connectivity can be pushed too far. Parag Khanna, another writer on the subject, has few such fears. He argues that connectivity and infrastructure alliances best explain China’s ambitious Belt and Road Initiative to link Asia and Europe, along with its associated banking and finance ones: “Traditional alliances have been replaced with dalliances, ephemeral partnerships based on supply-demand complementarities”.

He spoke at a European Union-Japan summit in Brussels last September where the idea that competitive connectivity is a fundamental feature of geopolitics in the 21st century was advanced. They signed an agreement on sustainable connectivity, the first in a series with the EU’s Asian interlocutors.

The European Commission has appointed Romana Vlahutin ambassador-at-large for connectivity with Asia and mandated her to pursue better relations with its states, regional organisations and businesses. She sees connectivity as a key policy trend, carrying values, norms and rules as well as more concrete projects . It therefore has security aspects, covering climate change, higher technology and resilience issues for developed and developing states alike.

Who sets these rules will determine how connectivity is governed and regulated. The EU is in a strong position to determine the rules, based on its sophisticated experience in the governance of difference through the development of a European single market and customs union since the 1980s.

This “Brussels effect” applies to old-economy industries such as chemicals and cars, to agricultural products and food safety and to data protection as the General Data Protection Regulation sets worldwide standards accepted by the largest companies, including American ones. Connectivity continues the discourse about globalisation, adding to it a new politics of trade interdependency among groups of competing regional powers and organisations.

Vlahutin’s mandate covers the four mainstream pillars of transport, energy, digital and human connectivity, as is outlined in a 2018 EU strategy document. She deals with their physical, financial, partnership and sustainability aspects, taking account of fiscal, social and environmental level playing field conditions.

A 2019 European Commission paper on China develops a comprehensive policy position based on economic, political and security engagement with China – “a systemic rival promoting alternative models of governance”. China’s governance is now challenged by the lack of free expression and trust – vertical social and political connectivity – in handling the coronavirus.

Health crisis response mechanisms should be a major plank in Europe’s new connectivity relations with Asia.