World View: Brexit toxic for unionists if it reinforces the North's divergence from the EU 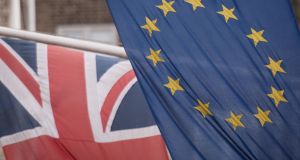 The LucidTalk survey is based on a stratified panel of 13,207 voluntary respondents regularly surveyed online about a broad range of commercial and political issues. Photograph: Stefan Rousseau/PA

The nature of the UK government’s mandate for negotiating its future relationship with the European Union, published last week, is likely to stoke the debate about the future of Northern Ireland. It pulls back, in the name of UK sovereignty, from the commitment, given in the political declaration accompanying last October’s Withdrawal Agreement, to respect level playing fields with the EU in environmental, labour and health matters. UK ministers say they will not allow border checks on intra-UK trade in the Irish Sea despite the agreement’s treaty commitment to arrange them jointly.

In the latest LucidTalk survey, released during the week, some 82.4 per cent of Northern Ireland respondents  answered yes to the question: “Do you believe that Brexit has intensified the debate about Northern Ireland’s future?”

This survey also shows opinion closely divided on Northern Ireland’s future, with 46.8 per cent for staying in the UK and 45.4 per cent for a united Ireland. Support has swung towards unity and away from the union among Alliance voters who now make up a growing proportion of the electorate. The survey likewise shows greater numbers feeling Irish and fewer British because of Brexit.

Brexit appears increasingly toxic for unionists if it reinforces the divergence of Northern Ireland from the European Union, as the Johnson government’s policy seems set to do, even if it resists the North diverging from the UK, as ministers now proclaim.

Two caveats must be entered. The first concerns how the UK policy is interpreted. If it is mainly positional posturing for a domestic audience ahead of the talks and if the UK bargains more pragmatically as they proceed (including on the Irish Sea issue) this Brexit effect will be mitigated in a presumably messy compromise allowing further talks after this year’s deadlines.

The second concerns an important difference between this LucidTalk survey and others carried out by academic survey teams. The LucidTalk one is based on a stratified panel of 13,207 voluntary respondents regularly surveyed online about a broad range of commercial and political issues. Each survey – in this case of 1,871 people from that bigger panel group – is further stratified by age, gender and community affiliation.

In contrast, a survey carried out by Liverpool university researchers in the same period based on over 2,000 face-to-face interviews found 52 per cent favouring staying in the UK and 29 per cent a united Ireland; when don’t knows are excluded, the respective figures are 65 to 35. It found 35 per cent defining themselves as Irish, 34 per cent British and 23 per cent Northern Irish. Most people want to minimise Brexit fallout and stay close to the EU.

Methodological differences between the two kinds of survey have important political effects. The online panel ones give much greater support for Irish unity and are cited positively by nationalists, while the face-to-face academic ones show substantially less support for unity and console unionists.

This matters if surveys would be one trigger for a Northern Ireland secretary of state to call a referendum on unification, as the Belfast Agreement provides. Arguments continue on whether online panel surveys privilege more politically and socially engaged citizens to give pro-unity views, or whether face-to-face interviews underestimate such views – even if the latter do discern a slower change in similar directions.

That Brexit is a disruptive and salient factor is less disputed. On one plausible reading, the survey evidence gives time for unionists to engage with and implement more fully the three strands of the agreement in Northern Ireland, between North and South and between Ireland and the UK, if they want to head off a united Ireland. That will involve political competition between those preferring an improved Northern Ireland in a reformed UK and those who say a united Ireland in the EU can better deliver increasingly non-aligned citizens there a more open and liberal European identity.

There is an opportunity for such a reforming centre ground in the North to link up with a similar current in the South if a Fine Gael-Fianna Fáil coalition bears fruit. That would make such political competition between multiple constitutional futures island-wide.

A failure by unionism to grasp this opportunity for engagement, combined with a harder Brexit, would speed up debate on Irish unity. Sinn Féin in opposition or in a new election here soon if Brexit goes badly would gain if they promise a transformed and more social democratic version of unity.

All parties and their supporters badly need more time to deliberate and prepare for such possible, complex and heretofore under- and ill-examined change.

1 Coronavirus: Restrictions resulting in ‘huge’ fall in rate of infection growth
2 A letter to Ireland from Italy: this is what we know about your future
3 Ireland ‘squanders’ geographical advantage with different Covid-19 stances North and South - Scally
4 From yoga to HIIT training, your guide to solitary exercise
5 Flu epidemic of 1918 warns us of coronavirus risk to frontline workers
Real news has value SUBSCRIBE