Health and housing crises could be tackled through better local government

World View: Many services can be better delivered locally rather than nationally 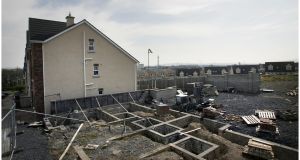 Unfinished house in Portlaoise in 2012. The decision to abolish town councils in 2014 reduced Irish local authorities from 114 to 31 compared to 600 when elections were first held in 1899. Photograph: Bryan O’Brien

Eight per cent of Irish public expenditure is at local authority level, compared to 23 per cent across 23 comparable EU member states. Ireland is the most centralised state in another authoritative list of 39 European states, trailing after or before Moldova, Malta, Cyprus and Greece.

These comparative facts and figures about Irish democracy, citizenship and public spending matter during an election campaign in which health, housing, education, childcare and community security loom so large. Other European countries handle many of these issues at local level where they can be effectively delivered with more political accountability.

Ireland’s outrider status in these and other areas reveals much about our condition that is not addressed adequately in public debate about potential reforms and political direction. Although this state is one of the richest in the world and classified among its most developed societies, popular aspirations for better public and social services contradict existing methods of governing and taxation to provide them.

The financial and austerity crisis from 2008 sharply reinforced the centralising trend already there, as is documented lucidly by the historian Dermot Ferriter, political scientists Aodh Quinliven and Mark Callanan, and political sociologist Mary Murphy in a recent paper for trade unions.

Not only is local control removed but there is a spin-off to the character of political life. Centralisation reinforces the local brokerage role of TDs in dealing with Dublin bureaucracies, widens gaps between the capital and other regions and removes a range of professionalism, jobs and skills from towns and localities. They are thereby disempowered and disimproved. Centralisation also disencentivises efforts to put pay and conditions for local representatives on a more realistic footing. They are paid €17,000 a year, not enough to reward the necessary full-time work by younger and more female representatives, leaving the field to older, conservative and better-off males. A revived and reformed local system would benefit immensely by empowering women to run more services and encourage popular participation in decision-making.

Most of the party political manifestos have sections on local government.  Fine Gael would review power transfers from executives to mayors arising from the citizens’ assembly planned to examine the issue in Dublin. Fianna Fáil proposes to revive town councils as a way to strengthen local communities. Sinn Féin, Labour, the Greens and People Before Profit take more account of the erosion of local powers and the progressive potential of remunicipalising them.

Shifting powers back to local levels is not a panacea or a magic wand, but it does promise a better way to meet the needs of Ireland’s more modern society. Closing that 8-23 per cent gap in spending between Irish and European local authorities would involve a major change in political practice and culture and deserves more sustained attention, including by a citizens’ assembly.

Shifting powers back to local levels is not a panacea or a magic wand, but it does promise a better way to meet the needs of Ireland’s more modern society

Systematic comparison with European states reveals other ways in which Ireland is outside mainstream practice, especially among smaller ones. Thus Ireland stands out in OECD and EU statistics as a relatively low-taxed state in terms of overall public income and expenditure – on one EU estimate, the total tax take is 30.3 per cent of gross domestic product compared to an EU average of 40.7 per cent.

Tax on corporate profits here are well-known to be low for competitive reasons; but often the effective rate paid is far less than the formal 12.5 per cent. The recent windfall income from digital multinationals parking huge intellectual property capital here is highly vulnerable to policy change elsewhere.

Less well-known is that employer contributions to social insurance are only about one-third of the European average. There is real scope to increase them, thereby relieving pressure to use private insurance. That could help fund a more sustainable (and localised) universal Sláintecare system.

Such fiscal and political reconfiguration is all the more needed after Brexit removes the usual all-too-easy and often misleading Anglocentric frames of reference.

1 Could Ireland put towns under lockdown if coronavirus arrived?
2 IRFU seek meeting over call to postpone Ireland-Italy match
3 Dublin man may have been stabbed to death by woman in parking space row
4 Irish in Italy on coronavirus: ‘The city is in a bit of panic – the streets are empty’
5 Coronavirus: Irish holding back on holiday plans
Real news has value SUBSCRIBE