Breda O’Brien: We must acknowledge those we lost during Covid-19 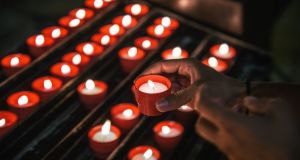 Beginning to plan rituals now would be an acknowledgement of hope and resilience. Photograph: iStock

On this peculiar St Stephen’s Day, at the end of a most peculiar year, some of us are feeling a kind of bereavement. We miss the ordinary rituals that we took for granted until they were taken away. It might be a Christmas day dinner with lots of relations, or simply standing at the back of a packed church. We miss particular people with whom we normally share these events.

For some people, the empty chair is not temporary but permanent because someone beloved has died. Since March, people have been denied the rituals which soothe the rawness. It does not matter if the deaths were from Covid-19 or any other reason. The socially distanced funeral, whether religious or humanist, is a contradiction in terms.

Rituals like funerals shelter us by providing a framework and structure which contains what seems uncontainable, makes bearable what seems impossible to bear. Rituals remind us that, although our particular grief is unique, grief is an experience shared by all human beings. For some, rituals are moments of elevation, of grace made tangible.

Having lit a candle and said a prayer, we would leave, discussing the crib as if it were not almost identical to the previous year

Like Willy Loman’s wife, Linda, in Arthur Miller’s Death of a Salesman, rituals demand that attention must be paid.

I have always liked St Stephen’s Day, probably because of an annual ritual. Our father would pile his children into the car and take us to visit the cribs in all the churches in the area.

As I write this I am smiling, not just because of that memory, but because I am imagining what my dear friend, Christopher Noel Bailey, who died in July 2017, would be likely to say about those childhood trips.

Chris, although a deep-thinking and sensitive individual, also had a gift for gentle mockery. The first time that he and his family joined ours for a summer holiday, he discovered that the house where we stay in Connemara is practically in the shadow of the local parish church. He rolled his eyes in the general direction of the church and said, “Breda O’Brien goes on holiday”. Shortly after, when we went into Clifden and I suggested parking was easy to find in the church car park, he added, “Breda O’Brien on a day out”. No doubt, on reading this column, he would mutter, “Breda O’Brien on a childhood outing”.

Chris would be right, of course. Rituals shape us. Fintan O’Toole wrote beautifully in recent times about the ritual of reading to his children. I do not remember my father reading to me but I do remember that he frequently brought us home books, Bancroft Classics, from Dungarvan. He took me to the tiny local library where he let me use his ticket, as well as my own, to feed my hunger for books.

Anyway, back to the childhood outing. In retrospect, it was probably undertaken at least in part to give my mother a break after the demands of Christmas day. We would visit all the churches within easy reach: Ballylaneen, Faha, Kill, Saleen, Kilmacthomas and back again to Stradbally. Every stop had the same ritual – pushing a door left unlocked and entering an empty church with its mingled smells of incense, dust and candles, genuflecting, and making our way to the crib. Having lit a candle and said a prayer, we would leave, discussing the crib as if it were not almost identical to the previous year.

We instinctively reach for familiar symbols, such as bells, candles, standing in silence

I had a particular fondness for Saleen Church, because it was so small and cosy, perched on the side of the road outside the village of Bonmahon. It had a tiny but perfect crib. But part of the ritual was agreeing that our own parish church had by far the best crib, which we duly did, every year.

My father was not a particularly demonstrative man and in ways was typical of men of his generation; stoic to the point of obstinacy in the face of pain, and silent when it came to words of praise for fear it would give you a big head. My father was still doing Lough Derg into his eighties. You get the picture.

Both Chris and my father died when it was possible to have a traditional Irish funeral. Glad as people are to have anything at all, watching a funeral online is a lonely experience. Funerals before Covid-19 were rich because they were shared with many others, full of unexpected moments of humour and previously unheard stories.

When we can gather together again in numbers, we will need rituals that accommodate and acknowledge loss, including the loss of rituals. While Covid-19 has constricted every aspect of our lives, tragedies and deaths unrelated to the virus have continued to happen and need acknowledgement, too.

The State should play a part but the most meaningful response will come from neighbours and communities, including but not confined to churches.

We instinctively reach for familiar symbols, such as bells, candles, standing in silence. Beginning to plan such rituals now would be an acknowledgement of hope and resilience. It would open the door to the sort of community healing that we do so well and need so badly.