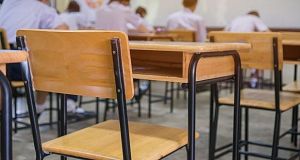 The government needs to develop the ability to plan for best and worst-case scenarios. File photograph: Getty

A young couple hoping to get married next summer cannot just have a plan A and a plan B. They need plans covering a whole range of possibilities from having anything from six to two hundred guests at the wedding.

This level of planning seems beyond the government. This week, yet again, we had the spectacle of educational policy being invented on the hoof, with little or no consultation with the people whose responsibility it is to implement it. Predictably, the unilateral decision to impose a three-day week in schools for sixth years has caused an angry backlash.

The three-day model will not now be implemented on Monday due to real public health concerns for students and teachers. Politicians were out of step with the level of public anxiety about the potentially deadly disease.They may have meant well but it lacked foresight and awareness of the logistical challenges, including the problems facing teachers with young children.

What can be learned from this mess? The government has to stop being definitive about things about which it is impossible to be definitive. It cannot promise sixth year students who have already experienced extraordinary stress that the traditional Leaving Cert will happen. Instead, it must be both more modest and more ambitious, by developing a limited number of alternatives and investing heavily in making the best case happen while being prepared for the worst case. It needs to treat the educational partners with respect and institute real consultation.

At the moment, calculated grades are the worst-case scenario for Leaving Cert students because they have no credibility given how badly they worked the last time. (This includes the fact that class rankings were released despite assurances that they would not be, adding to students’ angst.)

Politicians should stop repeating that the Leaving Cert will be held no matter what. Be honest. The traditional Leaving Cert will be held unless there is another massive upsurge in cases, or the vaccine turns out to provide limited immunity, or any other frightening scenario. But in the meantime, contingency plans for calculated grades need to be put in place including testing the system rigorously to prevent the egregious errors which crept in the last time.

Historical data from schools will have to be taken into account in order to avoid the kind of grade inflation that happened in 2020, while at the same time not penalising the exceptional students who far exceed the average grades in their school. This is not an easy process but it cannot be rushed again at the last minute or results will be predictably disastrous.

At a time of crisis, the government will be reluctant to spend considerable sums on a system which every adult involved in education fervently hopes will never have to be used. Teachers abhor calculated grades for the damage they do to their relationship with students. But the alternative to preparing for calculated grades is to have a system in which no one has faith at the very time at which it is most needed.

Even if Covid-19 cases decline, Leaving Cert students cannot be expected to sit exams with the current minor concessions regarding the papers and coursework. Further accommodations will have to be made right now. These students have had their education seriously disrupted and this must be recognised in a practical way.

It is also extraordinary that this week students and teachers were expected to be among the few exceptions who would move about in the community and mingle in large groups during what Michéal Martin described as a tsunami of infection. Yet no mention was made of prioritising them for vaccination. Everyone accepts that the elderly and healthcare professionals must come first, but if we are serious about reopening schools in full as soon as possible, surely teachers should not be eleventh in a queue of 15 and students should not be fifteenth?

It is important that there is realism about what is possible with remote learning, too. Communication via screens is exhausting and inadequate. Furthermore, just try listening to any radio station and hear how often there are problems with interviewees on mobile phones and how often interviews have to be abandoned or re-scheduled. Then think about how much more complex an online lesson is. When it comes to digital technology, multiply the difficulties caused by mobile phones by a factor of 10. Teachers and students will be working with equipment never designed to bear the weight of remote teaching, and sometimes with inadequate broadband and almost no IT support.

The priority now has to be to keep everyone safe and healthy. Students need to be reassured that everyone is planning ahead and prioritising their welfare. It is important that parents, students, teachers and managers, and yes, even politicians, all cut each other some slack in these terrible times.