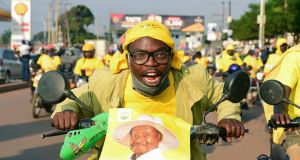 A supporter of Ugandan president Yoweri Kaguta Museveni celebrates in Kampala on Saturday after their candidate was declared winner of the presidential elections. Photograph: Nicholas Bamulanzeki/ AP

Following a tarnished election marked by tanks on the streets to “maintain order”, the repression of opposition voices and the press, and a lockdown of the internet, Uganda’s strongman president Yoweri Museveni will comfortably extend his 35 years in office with a sixth term. But the manner of his re-election on Saturday will do nothing for the political legitimacy of his election and rule domestically or abroad.

The campaign was notable for the emergence of Bobi Wine, a 38-year-old musician and opposition candidate, who has faced arrest, obstruction, gunfire and tear gas on the trail. Nicknamed the “ghetto president”, Wine, originally Robert Kyagulanyi, has become an articulate spokesman for a largely unemployed younger generation that never saw the fruits of Uganda’s economic revival. Ugandan security forces shot at least 54 people dead in November, during protests sparked by his brief detention.

On Friday he denounced an election he said was marred by “widespread fraud”. “I am very confident that we defeated the dictator by far. I call upon all Ugandans to reject the blackmail. We have certainly won the election and we’ve won it by far,” Wine told journalists.

The extent of the undoubted fraud, however, is unclear – the number of independent election observers was limited – and the president’s political writ still runs through much of the country’s villages and he retains strong support in the business community and middle class. Only in the central Buganda region, where Kampala lies, has opposition rallied strongly to Wine’s NUP.

Museveni, a former Marxist, fought his way to power just as the cold war was ending and was soon being extolled internationally and on the continent as one of Africa’s new modern, democratic leaders. He embraced market orthodoxy, privatising state firms, floating the shilling, and opening up to trade and foreign investment. Poverty has fallen, and growth averaged 6 per cent, but Museveni increasingly turned authoritarian.

His dubious re-election has all the hallmarks of a tired regime pulling its old tricks.