An inspector between 1922 to 1957, there are 447 references to her in the mother and baby homes report 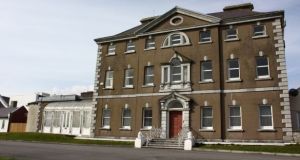 The Congregation of the Sacred Hearts of Jesus and Mary ran the Bessborough Home in Cork city for almost 80 years, during which time 923 infants died there. File photograph: Provision.

The Final Report of The Mother and Baby Homes Commission of Investigation is nearly 2,900 pages long. I have read perhaps a quarter of it completely, because I ended up following one particular thread almost by accident.

The Catholic Church (and the Protestant Churches) must take well-deserved blame for the many times, in the words of the apology issued by the Bon Secours Sisters, when they failed "to live up to [ their] Christianity."

In the midst of so much that is deeply depressing, I began to wonder about the people who did shout “stop”, out of a deep conviction of the dignity of every human being.

The most important are the hundreds of former residents who came forward to tell their stories, the local people who helped with their knowledge or assisted in relation to sites being investigated, and of course, Catherine Corless who acted as a catalyst.

But I was particularly interested in those who from the 1920s and 1930s onward were able to stand outside the mainstream in progressive and humane ways. I am sure I missed many of the prophetic voices. But what I found was fascinating. I hope someone will write a full biography of Miss Alice Litster, an inspector from 1922 to 1957. There are 447 references to Miss Litster in the Report.

She was one of a number of women inspectors employed by the State who are described as pioneers, valiantly attempting to improve conditions for women and children. She and the other women filed report after report praising what was good and practically begging for change when conditions were dreadful. For example, she says in one widely cited report from 1939 that, “the chance of survival of an illegitimate infant born in the slums and placed with a foster-mother in the slums a few days after birth is greater than that of an infant born in one of our special homes for unmarried mothers....I have grave doubts of the wisdom of continuing to urge Boards of Health and Public Assistance to send patients to the special homes so long as no attempt is made to explore the causes of this abnormally high death rate.”

It was courageous in 1939 but it is omitted from her final typed report. It was not the only time she was censored. In 1943 she was told to remove references to “miserable scraps of humanity, wizened, some emaciated, and almost all had rash and sores all over their bodies, faces, hands and heads” from a report on Bessborough.

For her tenacity, she was described by one bishop of Achonry as “a troublesome spinster who thought she knew everything about what was best for babies.”

Miss Litster praised Regina Coeli hostel, set up by the Legion of Mary in 1930, for accomplishing something “no other home in Éire did” – keeping mother and child together. She was often exasperated by Regina Coeli, too, as were others with the founder, Frank Duff. For example, the estimable Dr James Deeny, Irish chief medical adviser, described him as a “living saint” but also someone who turned off his hearing aid when something was said which he did not want to hear.

Duff, a senior civil servant in the Department of Finance, said that from “a very early moment it became a principal idea of the Hostel that mothers should be encouraged to keep their children permanently.” There was an ingenious arrangement where one woman would look after the children of five or six others in the Hostel while they went out to work. Regina Coeli was at times almost derelict, wildly unsuitable for the child inhabitants but also at the same time, progressive, tolerant and staffed almost entirely by dedicated volunteers. Miss Litster reports that women much preferred Regina Coeli to the nuns, which she suspected had something to do with the easy atmosphere, including that the women could smoke and go out to films.

Duff was completely opposed to industrial schools. It does not fit the narrative that it was a staunch Catholic layman and volunteers, motivated directly by their faith, who were among the few who could see how vital it was to keep mothers and children together.

The current narrative rightly credits brave people like journalists Michael Viney and John Horgan, or two people who later became president, Mary Robinson and Michael D Higgins, or the courageous founders of Cherish, Maura O’Dea and Colette O’Neill, who eventually brought about change in Irish society. But as the report makes clear, credit must also be given to public servants like Alice Litster, people like Frank Duff, like Fr Feargal O’Connor OP who set up Ally, and like Bishop Birch and Sr Stanislaus and their groundbreaking work in Kilkenny. (The latter led to the beginning of professional social care in Ireland.)

Irish society took a long time to listen to those who shouted stop about the Mother and Baby Homes. While that story is not yet over, perhaps we also could ask ourselves what practices that today are seen as not only acceptable but essential, will be looked back on with horror tomorrow?