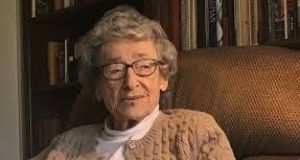 ‘I think we’ve all been a little haunted by that over the years,’ said Dr Lilli Hornig of the atomic bombing of Japan

Dr Lilli Hornig, who rejected a male chauvinistic job offer to type other scientists’ top-secret reports during the second World War and instead found her way to produce research that helped trigger the first atomic bomb, died on Friday in Providence, Rhode Island, in the United States. She was 96.

The cause was heart and lung failure, her daughter Joanna Hornig Fox said.

Hornig was in her early 20s in 1944 when, armed with a graduate degree in chemistry, she was offered the secretarial position at a secret atomic laboratory in Los Alamos, New Mexico, part of the US government’s Manhattan Project. Her husband had been hired as an explosives expert there.

The slight proved frustrating and fateful. Later, after receiving a doctorate from Harvard, she went on to dedicate her career in academia to championing women in science, mentoring younger women and advocating for major research universities to recruit more women as science students, professors and administrators. She also wrote or edited three books on women in science and higher education.

Hornig and her husband, Donald Hornig – he would later be a science adviser to president Lyndon B Johnson and the president of Brown University in Providence – had made their way to New Mexico in a 1937 Ford coupé after he was recruited by a fellow scientist, George B Kistiakowsky.

“Don, of course, went straight to work,” Hornig remembered, “and I went to the personnel office. And the first question was, ‘How fast can you type?’”

She couldn’t type at all.

“She had a Master’s degree in chemistry from Harvard,” Ruth H Howes and Caroline L Herzenberg wrote in Their Day in the Sun: Women of the Manhattan Project (1999), “but typing had not been one of the requirements.”

Hornig talked her way into researching plutonium with another woman hired by the project. But when her supervisors realised that the isotope they were working with was so radioactive that it might jeopardise the women’s fertility, she was reassigned to experiment with conventional explosives, joining her husband’s department.

The Hornigs experimented with separate aspects involved in detonating the explosive charges that would implode the bomb’s plutonium core and release unprecedented destructive energy, as the world would witness when the United States dropped atomic bombs on the Japanese cities of Hiroshima and Nagasaki in 1945, ending the war.

The bomb produced, in her, mixed emotions. Hornig had signed a petition urging that a prototype be demonstrated to the Japanese before the bomb was dropped on Hiroshima.

“But big boys like big toys,” she told The Providence Journal in 2015. “I don’t think the army even considered that request.”

Those ambivalent feelings were revived when she saw photographs of Hiroshima and Nagasaki after they had been levelled. On one hand there was a sense of “some triumph,” she said, “and the destruction was just so incredible”.

But, she added, “I think we’ve all been a little haunted by that over the years.”

Lilli Schwenk was born into a Jewish family on March 22, 1921, in Aussig, in the Sudetenland, which was then part of Czechoslovakia. (It is now called Usti Nad Laben and is in the Czech Republic, near the German border.) They later moved to Berlin.

Her father, Erwin, was an organic chemist who worked for the pharmaceutical division of Schering-Kahlbaum, a Berlin-based company that, among other products, synthesised oestrogen, the female sex hormone. (It is now Bayer Schering Pharma.) Her mother, the former Rascha Shapiro, was a paediatrician.

In Berlin, as the Nazis gained power, Erwin Schwenk, as a Jew, faced imprisonment and fled the country. The rest of the family soon followed and settled in Montclair, New Jersey.

“My father took me occasionally – very occasionally – on a Sunday to his lab, and I just loved all the glassware, and he gave me some micro-sized glassware for my dollhouse,” Hornig recalled in the oral history interview.

She added, “I always assumed I would – well, they assumed – that I would be either a chemist or a physician, and I was kind of squeamish at the time, so I went for chemistry.”

After earning her own doctorate at Harvard in 1950, Hornig became chairwoman of the chemistry department at Trinity, a women’s college in Washington (now Trinity Washington University). She later founded Higher Education Resource Services, a training institute at Brown. It subsequently moved to Wellesley College in Massachusetts.

The institute, known as HERS, researches discrimination against women historically and supports them by challenging sexism in hiring. The institute has found that the bias persists even though women outnumber men in colleges and universities and are being granted more advanced degrees in various disciplines than men.

In addition to her daughter Joanna, Hornig is survived by another daughter, Ellen Hornig; a son, Chris; nine grandchildren; and 13 great-grandchildren.

The Atomic Heritage Foundation estimates that only about a dozen of the 1,500 or so scientists who worked at Los Alamos are still living. – NYT Service