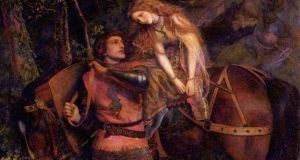 It’s news to me, but according to a US almanac called School of the Seasons, November 30th in Ireland is a day when, traditionally, the dead go dancing.

This is the culmination of a month when, starting with Halloween, they have been out and about in general. But today is a sort-of final fling, before they retire to quarters for another year.

There are dangers in this for the living. SOTS quotes a story from Padraic O’Farrell’s The Superstitions of the Irish Country People (1982), in which a foolish young woman goes walking on this night along the side of a hill somewhere.

She meets a “pale young man” and, accepting his invitation to a dance on the hillside, she realises too late that he – a recently drowned fisherman – and all the others are spirits. They proceed to whirl her into a state of exhaustion. And although she makes it back to her own bed eventually, she is found next day to have the “fairy stroke”, a fatal condition about which doctors can do nothing.

This story sounds strikingly similar, with genders reversed, to the plot of a poem many of us did at school, La Belle Dame Sans Merci by John Keats.

Avoid invitations back to anyone’s Elfin Grot tonight, and steer clear of dances on hillsides. The forecast air temperatures alone might do for you

That too features a pale, male protagonist on a hillside, except that he has lost his colour after an incident with a beautiful lady who, the night before, had invited him to her “Elfin Grot”, where one thing led to another, and eventually to “kisses four”, which appears to have been a lethal permutation.

This classic English poem and the aforementioned Irish superstition must have similar origins. But the moral of both is clear. Avoid invitations back to anyone’s Elfin Grot tonight, and steer clear of dances on hillsides. The forecast air temperatures alone might do for you.

In church calendars, today is St Andrew’s Day, named for the apostle who, when being crucified, supposedly asked for an X-shaped cross, considering himself unworthy of the type used for Jesus. This explains the flag of Scotland, whose patron saint he became after an ancient battle in which the saltire, miraculously appearing in a blue sky, foretold a Picto-Scottish victory over the Angles.

But St Andrew being a patron of lovers too, there are also some romantic divination rituals associated with November 30th, or more specifically with its eve. In Hungary, unwed romantics marked the night by pouring melted lead into cold water through the handle of a key: the resultant shape was thought to foretell a future mate’s occupation.

There must have been wide scope for interpretation of those results.

Not so with a Czech ritual whereby young women went to the woodpile during the night and picked a stick of wood at random. That foretold the shape of the actual mate.

Less romantically, Romanians believed vampires came out on St Andrew’s Eve to fight each other at crossroads.

But the superstition I like best – again mentioned in SOTS – is from Silesia, where women traditionally plucked branches from apricot trees at midnight and left them in water for the following few weeks. They then brought them to Christmas Mass where, during the priest’s blessing, branch-holders would suddenly be able to recognise all the local witches: identifiable by “the wooden pails they carry on their heads”.

Back in Ireland, November 30th has acquired great literary significance down the decades. On a happy note, it was the birthday 350 years ago of Jonathan Swift. On a more sombre one, it was the date on which, in 1900, Oscar Wilde lost his duel to the death with the wallpaper in his Paris hotel room, of which he had earlier quipped “one of us will have to go”, or words to that effect.

This was also the day, in 1967, when Patrick Kavanagh died. And in view of some of the foregoing, it might be slightly alarming to hear that today’s commemorative events in Inniskeen will be “live-streamed” from the “graveside”.

But that just means that those not attending can watch on their phones and laptops, via the Monaghan County Council Facebook page, as a novena of writers read some of his best-known poems.

The chosen titles include “Come Dance with Kitty Stobling”, which refers to a mythical, muse-like female figure who inspired Kavanagh’s work. Some of today’s more impressionable visitors to the drumlins may also feel compelled to dance with her while there. But don’t worry: the commemorative event begins at noon. It should be over well before dark.