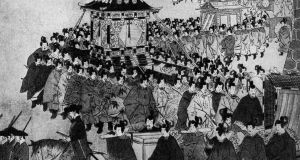 The Japanese concluded in 1868 that to get the economy working properly for as many people as possible they had to dramatically reduce the wealth tied up in land.

In June 1858, during the second Opium War, Britain and France, in cahoots with the other major European powers and the United States, forced China to sign the Treaty of Tianjin. Britain waged the Opium War so its merchants could flood China with cheap heroin, cultivated by other British merchants in India.

The treaty allowed western trading powers to annex China commercially, emasculate the emperor and carve up the vast wealth of the Middle Kingdom. The Europeans colonised the mainland from the east, while the resurgent US navy, fresh from annexing California from Mexico, moved across the Pacific from the west.

These events were watched with distress in Edo, as Tokyo was then known. In 1860 Japan was isolated, feudal and weak. It was an obvious next commercial target for avaricious westerners. If India and China could be enfeebled by imperialists, what chance had remote Japan?

But Japan didn’t go the way of China. By 1900 Japan had become the most advanced independent nation in Asia. By 1905 it was trouncing the Russians on the battlefield.

In 1868, the Japanese responded to the threat of the West with the Meiji Restoration, a cultural, political and economic revolution that was intellectually and socially on a par with the French Revolution.

At its core was an economic renaissance aimed at moving Japan from a feudal, land-based system, where wealth and power were vested in landowners, to a modern, industrial power based on innovation and trade, where wealth was vested in commerce.

Much has been made of the Japanese strategy of imitating western technology, but central to that extraordinary turnaround was this internal reform. Alone among major countries, the Japanese introduced a substantial land tax.

Planners in Tokyo realised the country couldn’t compete with the West as long as wealth was tied up in land. They also knew their rising population demanded the efficient use of land to fix Japan’s housing crisis.

The land tax reduced the incentive for feudal landlords to “hoard” land. It encouraged owners to either use land more efficiently or sell it to others who would do so. Tax focuses the commercial mind like nothing else.

The Japanese concluded that to get the economy working properly for as many people as possible they had to dramatically reduce the wealth tied up in land. They were right.

Feudal land-based economies, where land, rather than innovation and hard work, is the source of wealth simply enrich a drone class. The drones live off land, push its price up and drive down the quality of life for others, such as renters and first-time buyers.

Ireland needs its own Meiji Restoration.

If we really want to fix the housing crisis, to address in a meaningful way wealth inequality in Ireland, to arrest the growth of sprawling suburbia and to create an innovative economy, Ireland needs to introduce a significant land tax.

Such a land tax, levied on land, not property, would eliminate land hoarding and dramatically increase the incentive to use land efficiently. This would make more land available for development and substantially reverse the dereliction that afflicts our cities.

At the moment Ireland hardly taxes land at all. We raise huge sums from income tax and consumption taxes, but we hardly touch wealth and land.

And, although it sounds paradoxical, to make land use productive you have to tax it. Otherwise there is no incentive to use it efficiently. Land hoarders just sit on land, gouging a growing population that needs a place to live.

Implicit in the Irish societal contract is a huge transfer of wealth from working people to a quasi-feudal land-owning class, increasing wealth inequality. Irish inheritance – still the easiest way to get rich – is based on this.

As wealth inequality rises and the very wealthy get yet wealthier, more and more people feel their stake in society is diminishing, which drives political extremism. Massive wealth inequality and democracy don’t mix.

Land-based inequality and modern capitalism don’t mix either. The Meiji Japanese understood this.

Ultimately, everything that the capitalist economy produces comes from four inputs: labour, enterprise, capital and land.

Labour and capital are highly productive, while enterprise is the human alchemy – innovation – that makes everything tick. The more you work, the more money you commit to a project or the more human ingenuity you devote to an idea, the more they all grow. You get more wages, products and initiatives. Therefore, society is better off.

When a landlord buys a site for €200,000, does nothing to it, sits back and sells it on for €400, 000, nothing has happened to make society better off. The landlord is better off, but that’s it. Worse still, the costs of the higher land price are passed on to those who will eventually pay more in higher house prices. This applies as much to publicly-held land as it does to private landlords.

A substantial tax on unimproved land held by both the public and private sectors would fix this. If we do nothing to the tax system we will facilitate more money flowing into this most useless of assets, starving the productive economy of liquidity and investment.

It will also enrich a drone class at the expense of working people and keep house prices rising by leaving large sections of essential building land lying fallow. (I’m not joking. For example, if you drive along the M50 northbound, you will see horses grazing within the M50 as if you were on 19th-century American prairies. This is in a country with an acute housing crisis.)

Ultimately the more tax we raise from land the less tax we must levy on income, which will in turn increase the incentive to work. This is how we can regenerate the economy, driven by an ancient concept called the public good.