A star of The Riordans who loved cooking and food 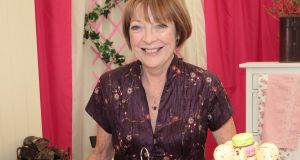 Biddy White Lennon in The Great Irish Bake Off on TV3

Biddy White Lennon, who has died aged 71, played the much-loved character Maggie in the RTÉ drama The Riordans but later used her passion for food to find a whole new audience as a food writer.

She was the daughter of Prof Ursula White, who taught voice production and drama at the Royal Irish Academy of Music and ran the Pocket Theatre on Ely Place. Her father Tommy Lennon ran the Abbey Theatre bar, so Biddy was dipping her toe into familiar waters when she started acting at the age of four.

Biddy and her brother Frank enjoyed a bohemian childhood and revelled in the freedom of leaving the city every summer for a seaside house in Donabate. In Wild Food, a book she co-wrote with Brook Lodge Hotel’s Evan Doyle, she recalled how their parents made only fleeting visits to the summer house, bringing delicious cheese, ham, smoked fish and pasta from Smith’s or Findlater’s, and leaving money with the children to buy food. An early convert to foraging, Biddy preferred to gather food from the bushes and trees, and spend the money on ice-cream and ginger beer.

Her earliest memory of her father, who died before her 10th birthday, was of him gathering mushrooms for breakfast on the links golf course which backed onto the summer house.

Her big break in acting came when she landed the role of Maggie Nael, a love interest for Benjy Riordan in the landmark rural drama The Riordans, which started in 1965. Maggie Nael would go on to marry Benjy and become a key character in the soap.

The drama did not shy away from tackling contentious issues, and Maggie was involved in one of its most controversial storylines when she started taking the contraceptive pill because another pregnancy would have put her life at risk. The priest’s sympathetic view to her plight generated many irate calls to RTÉ’s switchboard from people who believed the drama was subverting the teachings of the Catholic Church.

Benjy later became a lay missionary in Africa and Maggie got a new love interest when smouldering young actor Gabriel Byrne joined the cast. Biddy would recall with some glee that she had been “read off every altar in Ireland” after they embarked on an affair.

The Riordans was cancelled in 1979, but then switched to radio and continued into the mid-1980s. Biddy and her husband, the late writer Denis Latimer, wrote for the show.

As she rested between acting parts she picked up jobs in restaurants and honed her cookery skills. She and Denis worked their way through the cordon bleu cookery course and the couple pored over cookery books by chefs such as Madhur Jaffrey and Ken Hom.

When their only child Dairsie requested some of his favourite recipes as he left home for university in England, the idea for a cookery book was born. The Leaving Home cookbook would be the first of her 14 books.

She formed strong friendships with other food writers, and when they suspected there was an attempt to drive down their fees they came together to form the Irish Food Writers’ Guild in 1990. They set up the guild’s Good Food Awards, and Biddy became known as a champion of Irish food producers and artisan foods. She was also involved in setting up the Wicklow branch of Slow Food Ireland.

More than three decades after The Riordans left television screens, Biddy returned to Irish sitting rooms as a presenter on TV3’s The Great Irish Bake Off in 2013.

She has been described as a gallant friend with a mischievous sense of humour, straight-talking, inquisitive, energetic and quick-witted. She championed the need for tolerance, and used her public profile to call for a Yes vote in the marriage equality referendum.

She was a breast cancer survivor but was diagnosed with lung cancer in recent years, and died peacefully after a long illness. Fellow food writer Georgina Campbell recalled that Biddy was “upbeat and positive to the end. She never gave in to the illness.”

Her husband predeceased her in 2016. She is survived by son Dairsie and his family, and her brother Frank.

3 Michelin stars 2021: The Irish restaurants in the running