Northern Ireland and the TripAdvisor index of economic vibrancy 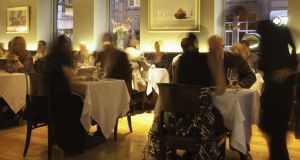 True North: although restaurants may have lost some of their social cachet, they still reveal, sociologically, something about a place. Photograph: Macduff Everton/Corbis Documentary/Getty

When I was a boy I never went to a restaurant with my parents. On very special occasions we might go a hotel grill room. Restaurants were for other people, of a different caste. Restaurants signified not just wealth or commercial status; a more adventurous palate indicated a subtle form of worldly sophistication.

Back then, appreciating the aromatic delights of ginger facilitated your entry to rarefied strata. Not any more. But while restaurants may have lost some of their social cachet, they still reveal, sociologically, something about a place.

So let me introduce a new indicator of economic development, the TripAdvisor index of economic vibrancy. This measures the number of restaurants reviewed on TripAdvisor in any town. Restaurants capture economic dynamism, disposable income, demography and social vibrancy, all of which, when added to hard numbers, help give a sense of a place.

Simon Coveney’s recent remark that he would like to see a united Ireland in his lifetime prompted me to compare the TripAdvisor indices for the Republic and Northern Ireland. If we are talking about a united Ireland, we should know what we are dealing with.

So before we talk restaurants let’s talk people.

Ironically, despite the fact that Ireland’s future is framed in demographics, demographics are rarely actually examined. Without data we just have opinions; with data we have forecasts.

Data from the 2011 census in of Northern Ireland show the Protestant population in the North is falling more quickly than most appreciate. The Catholic population is doing the opposite. One striking number is the comparison, by religion, of the very oldest cohort in Northern Ireland with the very youngest.

The Catholic population of children, as a percentage of the total, has nearly doubled in 90 years while the Protestant population has practically halved

In the over-90s the religious split is 70 per cent Protestant and 28 per cent Catholic. There are just over 10,000 people over 90 in the North. Children of the 1920s, they are the first generation born in the newly created Northern Ireland, and the religious split in this age group demonstrates the demographics that underpinned partition.

Now look at the population in Northern Ireland, from the same census, of children under five. There are 147,000 under-fives, and this age group is 48 per cent Catholic and 37 per cent Protestant.

So between the births of these two groups, 90 years apart, the Catholic population of children, as a percentage of the total, has nearly doubled while the Protestant population has practically halved.

Every politician needs to be aware of these facts when considering Brexit and the future relationships on this island. They help us to forecast the political future of the North using numbers rather than opinions or slogans. (For the sake of transparency, let me declare that my Protestant family in Belfast were split down the middle, half voting for Brexit, the other half to remain. Christmas dinner at the in-laws’ should be interesting.)

Extrapolating from these figures, I calculate that Catholics will become the absolute majority in Northern Ireland around 2036, and this majority will only strengthen from then on. That’s less than 20 years away. The Belfast Agreement was signed 20 years ago, and it seems like only yesterday.

Changes are coming, and coming quickly. Could Simon Coveney be right about a united Ireland in his lifetime? Maybe

What does all this mean? It means changes are coming, and coming quickly. Could Coveney be right about a united Ireland? Maybe.

But could the Republic absorb the North economically? To answer this we have to understand that the two economies are very different. The union with Britain has been an economic calamity for Northern Ireland. All the people have suffered, Catholic and Protestant, unionist and nationalist.

In 1920, 80 per cent of the industrial output of the entire island came from the three counties around Belfast. Belfast was the biggest city in Ireland in 1911, larger than Dublin, and was home to Ireland’s innovation and technology.

At partition the North was industrial and rich, the South agricultural and poor. Fast-forward to now, and the contrast couldn’t be greater. The collapse of the Northern Ireland economy compared with that of the Republic has been unprecedented. East and West Germany come to mind.

Economically, the Union has enfeebled the North while independence has enriched the South – particularly since the peace process. Commercially, there was a huge peace dividend, but it went south.

The Republic’s economy is four times larger, generated by a work force that is only two and a half times bigger. The Republic’s industrial output is today 10 times that of the North. Exports from the Republic are 17 times greater than those from Northern Ireland, and average income per head in the Republic, at €39,873, dwarfs the €23,700 across the Border.

Immigration is a traditional indicator of economic vitality. In the Republic one in six people are immigrants, the corresponding figure for the North is one in a hundred.

TripAdvisor has reviews of 176 restaurants in Kilkenny but of just 43 in Armagh. This tells its own story of small-business activity, how we spend money and how society is structured

It would still be a huge challenge to the Republic’s economy to absorb the North – and many Southerners mightn’t want to if asked.

The differences aren’t just economic; they are cultural, not only in the sense of flags and commemorations but also socioculturally.

And this is where the TripAdvisor index comes in, revealing that the North is another country in a different sense. Take Kilkenny and Armagh, a similar-sized Northern town with city status. TripAdvisor has reviews of 176 restaurants in Kilkenny but of just 43 in Armagh. The entry for Coleraine has only 58, for Antrim just 49.

This tells its own story of small-business activity, how we socialise, how we spend money and how society is structured. The North is different.

Demographics are leading to a changed North, but Coveney’s dream of a united Ireland might not be the end point. Some Northern Catholics may want to remain in the Union, which ironically could be more attractive if the Catholic population were in the majority, because they’d have the power without having to pay for it.

Also, many people in the Republic might baulk at the unification bill. But the demographic patterns pose the most significant and immediate challenge for unionism, because, within a generation, democratic politics in the North will come down to whether unionism can persuade nationalism to keep Northern Ireland intact.

Now that is a tall order.

5 Michelin stars 2021: The Irish restaurants in the running