Fintan O'Toole: This is wrong time for a political circus 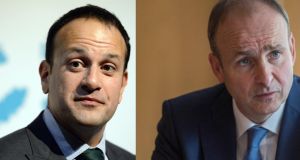 This is arguably the most difficult single moment an independent Irish government has ever faced. Photograph: Cyril Byrne

The irony of the current political crisis is that it has been hard to solve because the usual solution is already in place.

The problem with the saga of the Department of Justice and what it did or did not know about the continued smearing of Sgt Maurice McCabe is not that it is outrageous – which of course it is. It is simply that the outrage cannot find its normal ritual catharsis. Set up a tribunal! Oh feck, we already have a tribunal! The political immune system is breaking down and the strongest antibiotics have all been used.

To say this is not to trivialise the issues involved here. It is simply to say that what turned those issues up to the Code Red of existential crisis was not their actual substance which, after all, has been around for three years now. It is that this time the circus high-wire act of political indignation had no safety nets.

One net that would normally be there is skilful ministerial obfuscation. Look at Michael Noonan’s Dáil “answers” to Catherine Murphy on Siteserv or Enda Kenny’s “answers” on pretty much anything – masterpieces of evasion. The old stagers knew how to confuse and confound without actually uttering direct falsehoods on the parliamentary record. Their successors lack that dark skill.

And the other safety net is dragging an innocent old judge out of retirement and kicking the whole thing in his direction. But, been there, done that.

A high-wire performance without a safety net is thrilling to watch – the danger adds to the entertainment value. But it’s still a circus act. Fianna Fáil and Fine Gael have been putting on a show for their own tribes.

We can say two things about this show with some confidence. One is that, if the usual way out – set up a tribunal – had been available, they would both have taken it. The other is that if the roles were reversed, if Fianna Fáil had been in power when McCabe was being traduced and Fine Gael in opposition, the whole thing would have played out in exactly the same way except with different ministerial names. There is simply no reason to believe that Fianna Fáil when it is in office values and protects either whistleblowers or open parliamentary accountability any more than Fine Gael does.

So it’s a circus – and this is no time for circuses. The State is at an extraordinary moment. For the first time in its history – arguably for the first time in the entire history of “these islands” – Ireland is in a position of strength relative to Britain in a conflict that concerns the vital national interests of both countries.

The skilful work of Irish diplomats in turning Irish concerns over Brexit into the concerns of 27 EU member states, and the contrasting incompetence and incoherence of Britain’s approach to the Brexit talks, have created an unprecedented situation. Ireland has a very strong hand to play but it has to be played in the next few weeks and it has to be played with coolness, judgment and precision. If Ireland’s strength is used crudely, it will hurt not just the Brits but ourselves.

On the one hand, Ireland has to be tough. Last week, the senior British official planning its post-Brexit borders told the House of Commons that she is “not really able to say” what will happen in Ireland, because there are no plans at all. Faced with this breathtaking insouciance, Ireland in turn is “not really able to say” that sufficient progress is being made on the Border question for the EU to agree on December 15th to open trade negotiations with the British.

Yet this very British incompetence also makes Ireland’s tough stance dangerous. A no-deal Brexit is a nightmare for Ireland. It would create political and economic chaos and potentially cause anarchy on the Border. But the chances of just this no-deal Brexit will be greatly enhanced if the substantive trade talks do not get the go-ahead next month. The same lack of serious planning that has left the Border issue dangling also means that there is no grown-up understanding of what a no-deal Brexit would mean for Britain as a whole.

The fecklessness we have seen on the Irish question can also become a wider and wilder recklessness in which a childish unwillingness to face complexities results in a national tantrum and Britain just walks away. That’s the worst possible outcome for us.

In terms of strategy, then, this is arguably the most difficult single moment an independent Irish government has ever faced. If it does not push the British very hard now, Irish interests will be established in the talks process as marginal and ultimately dispensable. If it pushes too hard, Ireland may be collateral damage in Britain’s maddest act of self-immolation.

The skills required are those not just of the diplomat and politician but those of the negotiator trying to talk a deranged and delusional friend down from the ledge. But in our domestic political crisis, those same skills have been far from conspicuous. The political mainstream is dancing on the high wire when it should be playing poker.