Quick-witted Irishman brought touch of genius to world of advertising 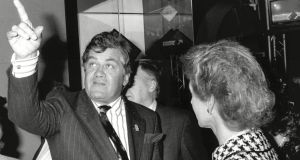 Anthony Simonds-gooding and Princess Alexandra: ‘it was impossible ever to be as great a friend to him as he was to you’

From the windows of his family home in Kerry, Anthony James Joseph Simonds-Gooding CBE, who has died aged 80, could see the mountains and the sea that he loved to paint in his latter days.

Far removed from the hustle and bustle of life in London where he had made his name as a leading advertising and marketing executive, it is an idyllic location – overlooking the Caragh river whose pools he had fished as a boy. It abuts a fairway of the links course at Dooks where he learned to play golf and where the clubhouse flag flew at half mast on November 30th to mark his burial in England. At the Towers hotel in the nearby village of Glenbeigh a commemorative event in his honour will be held this weekend.

Known as Tony to his friends, he was born in Dublin into a British military family and after 10 years in India was brought up at Dooks by his Irish mother and English father known locally as “the Major”. Following his schooling at St Gerard’s in Bray and Ampleforth in England, he joined the British navy, spending six years in the service before entering the world of business.

Blessed with a quick wit and irrepressible sense of humour, he brought a natural flair, plus a touch of marketing genius, to the fickle world of branding and advertising. His ads rank among the most successful in the business. For instance, he was behind the slogan that Heineken “refreshes the parts that other beers cannot reach”, effectively opening up the UK ale market to an in-flow of lager. Another of his successes branded Stella Artois as “reassuringly expensive”.

Getting his first job in Unilever, this was followed by posts in other companies including Whitbread (chief executive), Saatchi & Saatchi Worldwide (chairman). He was also appointed manager of the Birds Eye brand and later became chief executive of British Satellite Broadcasting (BSB), an ill-fated venture that resulted in a bitter confrontation with media mogul Rupert Murdoch in the 1980s, who he admired for his “vision and guts”. Murdoch eventually bought out BSB and turned it into BSkyB. Inevitably Simonds-Gooding’s business reputation suffered.

However, his reputation was more than restored by the next career move when in 1992 he was called in to rescue the struggling charity D&AD (Design and Art Direction). Not alone did he turn it around, it is now regarded as one of the leading charities of its kind. He also launched the highly successful Macmillan nurse appeal for cancer relief, becoming chairman of four companies including the Rose Theatre where his life-size portrait of theatre director Sir Peter Hall now hangs.

Painting was in his genes. His sister, Maria Simonds-Gooding is one of Ireland’s foremost painters and printmakers. Her work has been exhibited internationally and is represented in many public and private collections, including the Irish Museum of Modern Art and Metropolitan Museum in New York. So, it was perhaps not surprising that he turned to art in his twilight years, depicting “the faces and places of the West of Ireland”, as he said on his website.

So snugly did the Simonds-Gooding family fit into the local community’s social life that they both received the ultimate accolade of being chosen as presidents of the Glenbeigh Races. In 2010 he was conferred with the CBE (Commander of the British Empire) in the queen’ s New Year’s honours list.

In a warm tribute to him, Lord Puttnam observed that “the most infuriating thing about this incredibly quick-witted Irishman was that, no matter how hard you tried, it was impossible ever to be as great a friend to him as he was to you!”

He is survived by his first wife Fiona (they divorced in 1982), and their children Rupert, Lucinda, Dominique, Benedict and George. He was predeceased by his son Harry who died in a car accident. He is also survived by his second wife, Marjorie, and by his stepson, Daniel.