Intensive farming could cause ‘ecological Armageddon’ if insects are destroyed 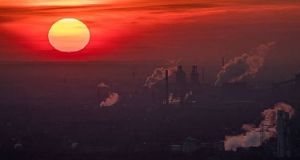 What do you imagine an “environmental radical” might look like? Chances are that an image of a 20 or 30-something in faded jeans with bicycle clips, maybe sporting a scruffy combat jacket with a “No Nukes”’ button, might spring to mind.

The above caricature is, I would suggest, hopelessly outdated. Today’s new breed of eco-radicals are more likely to wear Louis Copeland suits, drive a seven-series BMW and be on first name terms with the Taoiseach and his Cabinet colleagues.

Leo Varadkar is, in fact, the honoured guest of a gathering of climate radicals in Croke Park on Monday, December 4th. Other activists attending the day-long conference include the heads of Ornua, Kerry Group, Kepak, the IFA and Bord Bia.

The fruits of their radical Food Wise 2025 agenda involving the oxymoronic concept of “sustainable intensification” are already plain to see, with greenhouse gas emissions from Ireland’s agriculture sector up by over half a million tons in 2016, according to data published this week by the Environmental Protection Agency. This is at a time when emissions are legally mandated to be declining sharply.

Globally biodiversity is in freefall thanks in part to the toxic rain of pesticides and herbicides that are secret ingredients behind intensive monoculture farming.

This has triggered what Prof Dave Goulson of the University of Sussex called “ecological Armageddon” as insect numbers plummet globally. “If we lose the insects then everything is going to collapse,” he added.

It takes a true radical to shrug at such terrifying portents and focus instead on what a useful herbicide glyphosate really is, while it wipes out many insects’ food sources.

Despite the complexity the core findings of the science of climate change and biodiversity loss are painfully clear. The price of failure is ruin, on a scale beyond imagining. Some of those heading to the conference in Croke Park must have an unpleasant feeling deep down that they may be complicit in helping destroy their own children’s future.

Meanwhile, coal and peat-burning radicals in semi-State organisations like Bord na Móna and the ESB have overseen Ireland’s energy sector emissions rise by a massive 6.1 per cent in 2016, while emissions from our car-addicted transport sector also rose for the fourth successive year.

In an era of climate change it takes some truly radical thinking to spend over half a billion euro on a 57km motorway linking two towns in rural Galway, in full knowledge that the motorway is built across a flood plain.

The Collins Dictionary defines a radical as someone “favouring or tending to produce extreme or fundamental changes in political, economic, or social conditions”. This, I would contend, is an apt description of those who, in the face of overwhelming evidence of the calamitous harms that will arise from their actions, go ahead regardless.

Last month the Citizens’ Assembly issued 13 genuinely radical recommendations on climate action. These went light years beyond anything any of our major political parties have ever even countenanced.

Yet on the RTÉ news bulletin on the evening they were issued as much time was given to special interests rubbishing the recommendations as to discussing them.

And since then a deafening media and political silence.

The assembly proved that, when exposed to expert scientific guidance, uncontaminated by lobbyists, Irish citizens have the stomach for far more radical climate action than is reflected in the tokenistic approach favoured by “climate action” Minister Denis Naughten, as seen in this week’s second annual Government statement on climate change.

As in wartime, carbon would be strictly rationed. Flying would once again become a rarity. Public transport, cycling and electric car pooling, along with extensive home insulation retrofits, would largely eliminate fossil fuel usage.

A massive renewables programme would see Ireland approach energy independence, while bogs, native woodlands and sheep-wrecked uplands are restored and so biodiversity begins to recover.

Organic, plant-based agriculture would replace much of our emissions-intensive national beef herd. A healthier, mostly vegetarian diet becomes the new norm, and offers a more secure income to farmers.

The spell of mindless consumerism is at last broken, and we citizens relearn the lessons of our grandparents in making do with less and wasting little.

There is an upsurge in local and rural employment in repairing, growing and reusing. Resilient, energy and food-independent local communities would be best placed to weather the ever-worsening climatic and economic conditions that lie ahead. Soon enough we may all be climate radicals, but in the true sense of the word.

John Gibbons is an environmental writer and commentator and tweets @think_or_swim