Woman and child killed and 13 injured in Toronto gun attack

14 people, including a young girl, were shot near downtown Toronto on Sunday, with one person killed and the gunman also dead. Reports of gunfire in the city's Greektown neighbourhood began at 10 p.m. local time (0200 GMT Monday). 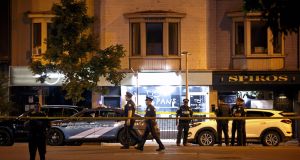 Toronto police officers on Danforth Street at the scene of a shooting in Toronto, Ontario, Canada. Photograph: Cole Burston/AFP/Getty Images

Two people were killed and 13 others been injured when a lone gunman opened fire along a lively avenue in the Canadian city of Toronto, seemingly shooting at random at pedestrians and into crowded restaurants.

Police said an 18-year old woman and a 10-year-old girl, both of them from Toronto and the surrounding area, were killed in the attack. Another 13 people, ranging in age from 10 to 59, remain in hospital, with injuries ranging from minor to serious.

The 29-year-old suspected gunman was also found dead in a nearby alley after a brief exchange of gunfire with police, though it remained unclear on Monday how he died. Police had yet to release his identity or speculate on a motive for the shooting.

Emergency services rushed to a Toronto area known as Greektown at about 10pm on Sunday night (3am Monday Irish time). A shooting spree, lasting minutes and spanning several blocks, had sparked terror in the busy area.

Diners enjoying a balmy evening scrambled to take cover, Andrew Mantzios told the Globe and Mail. He watched as the gunman crisscrossed Danforth Avenue, shooting into businesses. People were “falling all over the place – maybe seven, eight, nine of them,” he said.

“And then a lady tried to run and she fell down,” said Mr Mantzios. “He turned around and shot her point blank, two or three times.” He watched as the man continued down the street. “Believe me, I’ve never seen anything like that,” he said. “I am still in shock.”

Video posted on social media showed a man, dressed in black, walking quickly down the sidewalk before stopping to fire a handgun into what appeared to be a shop or a restaurant.

Jody Steinhauer said she was at a restaurant on Danforth Avenue with her family when she heard what sounded like 10 to 15 firecracker blasts. She was told to run to the back of the restaurant, she told the Canadian Broadcasting Corporation. “We started to hear people scream out front,” she said.

John Tory, the mayor of Toronto, described the attack as “a despicable act”.

“On behalf of all Toronto residents, I am outraged that someone has unleashed such a terrible attack on our city and people innocently enjoying a Sunday evening,” he wrote on Twitter.

“While our city will always be resilient in the face of such attacks, it does not mean such a cowardly act committed against our residents is any less painful – this is an attack against innocent families and our entire city.”

Mr Tory urged people not to speculate as to the motive of the attack and said he had “total confidence” in the ability of police to determine what happened.

Speaking to reporters shortly after the shooting, Mr Tory characterised the shooting as “evidence of a gun problem” in Toronto. Police confirmed that the shooter had used a handgun.

“Guns are too readily available to too many people,” he said. “It’s almost inconceivable that these things can happen. We were so used to living in a city where these things didn’t happen and as we saw them going on in the world around us [we] thought they couldn’t happen here.”

Toronto is grappling with a sharp rise in gun violence. There have been 26 deaths from gun violence in the city so far this year, a 53 per cent increase from the same period last year, with the number of shootings rising by 13 per cent, according to police data.

The shooting came just three months after a van attack in the city killed 10 people and injured 16 others.

The latest shooting took place days after Toronto police put about 200 additional officers on patrol in particular neighbourhoods between the hours of 7pm and 3am – when most shootings occur – as part of a plan to tackle gun crime in the city.

Paula Fletcher, a Toronto city councillor, told broadcaster CP24 that the shooting appeared not to be “gang related. It looks like someone who is very disturbed”.

Prime minister Justin Trudeau said his thoughts were with those affected by attack. “The people of Toronto are strong, resilient and brave – and we’ll be there to support you through this difficult time,” he wrote on Twitter.

Doug Ford, the premier of Ontario, tweeted that his heart went out to the victims and loved ones “of the horrific act of gun violence in Toronto”.

The Canadian band Arcade Fire were performing in Toronto on Sunday night and sent their “love to those affected” on Twitter. – Guardian

1 What evidence is there that the IRA still controls Sinn Féin?
2 Brazilian father to be deported days after daughter’s birthday
3 Why Sinn Féin will not call the State by its name
4 Spread of coronavirus triggers European travel curbs
5 Coronavirus: Austria restarts train services with Italy
Real news has value SUBSCRIBE