Brexit: What is the ‘backstop’ agreement and why does it matter? 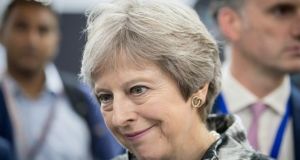 British prime minister Theresa May is under pressure to avoid a deal where Northern Ireland is treated differently from the rest of the UK.

The UK government is committed to avoiding a “hard” Border between Northern Ireland and the Republic, given that the current lack of border checks is seen as a big achievement of the Belfast Agreement. UK negotiators believe any trade agreement that it eventually signs with the EU will achieve that goal. However, it may take years to conclude a trade pact with the EU and to find the technology that guarantees a frictionless Border. As a result, the EU has insisted that the UK agree to a “backstop” that guarantees that an invisible Border remains in place until the new trade arrangements are up and running.

The “backstop” agreement reached between the EU and the UK in December 2017 stated that, in the absence of another solution for the Border, Northern Ireland would effectively remain within the EU customs union.

This would ensure no hard border on the island of Ireland, where the UK and the rest of the European Union share their only land border. However, Northern Ireland’s unionists and others are insisting that Northern Ireland be treated no differently than the rest of the UK after Brexit comes into effect in March 2019. They are therefore opposed to a border between Ireland and Britain, or a border in the Irish sea.

Theresa May also has already rejected that proposal, asserting that no British prime minister would ever agree to impose a border in the Irish Sea.

Instead, the prime minister argues that her Brexit White Paper, the Chequers proposal, published in July would solve the Border issue by creating a free trade area for goods which would avoid the need for customs and regulatory checks at the Border.

Ms May is also under political pressure to avoid the backstop proposal that would see Northern Ireland treated differently to the rest of the UK in an effort to avoid a hard border. MPs have backed an amendment to a customs Bill, proposed by Brexiteer backbenchers and accepted by Ms May’s government, that would prevent Northern Ireland being part of a different customs regime to the rest of the UK.

EU and UK negotiators have agreed to include new text in the draft withdrawal agreement that ties the parties to the “backstop” agreement.

Simon Coveney insists that if the British government doesn’t support current EU wording on the backstop contained in the draft Withdrawal Agreement, then the obligation is on them to propose “a viable and legally operable alternative wording that delivers same result: no border infrastructure”. The Tánaiste says clear UK commitments were made on this.

The EU’s position remains that, without an agreement on the backstop, there will be no withdrawal agreement and no transition period after Brexit. This scenario has become known as a “hard Brexit” or referred to as Britain “crashing out” of the European Union.