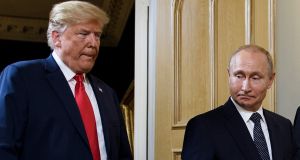 US president Donald Trump and Russian president Vladimir Putin: Mr Trump has found someone who wants to hang out with him and who understands he is THE MOST MISTREATED PRESIDENT IN HISTORY. Photograph: Brendan Smialowski/AFP/Getty

It’s “Executive Time” and the chief executive is very busy in the residence. Too busy even to give his full attention to watching Fox & Friends and tweeting the show’s chyrons. President Donald Trump will need every minute between 8am and 11am to plan his itinerary with Vladimir Putin. It will be very special. Hosting the world’s worst bad boy at the White House in autumn will be exciting, like having a friend over whom your parents can’t stand. The rest of Washington might be agog and aghast. But Donald Trump has finally found someone who wants to hang out with him and who understands that he is THE MOST MISTREATED PRESIDENT IN HISTORY!!! So he grabs his black felt marker to draw up the best agenda ever for his pal – with NO COLUSION from Kelly or Mattis or Coats or any of the losers who got so rattled after Helsinki.

6am Meet Putin at Andrews and fly him in my cool chopper to the White House. Show him the pictures on the wall of the huge crowds at my inaugural and my selfie with Little Rocket Man. Take him to the Situation Room. That will be a gas for him to see how we keep tabs on him. And maybe we can get some pointers.

7am Explain to Putin how our agitprop office operates. He will be very impressed at my routine, reading printouts of only the most positive articles about myself, even if we have to plant them ourselves with friendly news outlets.

7.30am Bring Putin over to the residence to enjoy watching me watch Fox & Friends and live-tweeting about the show and then the hosts will talk about my tweet and then we can both call in and talk about Crooked Hillary’s Uranium One scandal. And then we can watch it all again on TiVo. FUN!!!

8am Go to Oval to show Putin the soccer ball he gave me, now dipped in 24-karat gold and on display next to the picture of my father.

8.30am Ivanka will bring in her children, dressed in Red Army Choir uniforms, to sing Song of the Volga Boatmen and recite a poem they wrote about how dictators are our hope for the future.

9am I’ll show Putin all the best hiding places where you can disappear when that pest John Kelly is looking for you.

9.30am A Botox Bilateral, alone with no advisers or notetakers, to trash Nato for resisting paying its debts. I’m an expert on that subject because as a real estate developer, I always resisted paying my debts. We can celebrate the restitution of Crimea to its rightful place as part of Mother Russia.

10am Watch military parade on Pennsylvania Avenue featuring Russian and US troops marching together with missiles mounted on tanks and pointed at the media, the Enemy of the People, as our dear Lenin and Stalin called them. ENJOY!

11am Putin will be my guest at the National Security Briefing with CIA Boss Lady Gina Haspel. She can recount heartwarming stories about torture that will amuse Vlad the Impaler.

11.30am Sign an executive order to send that big-mouth Michael McFaul from Stanford to Siberia, along with that stool pigeon Michael Cohen. Snitches get stitches. And they call me a traitor!!

1pm Take Putin in the Beast for a tour of the city. We can stroll around the Capitol, where the Republicans who think I’m a traitor will STILL kiss my ring before the midterms. We can swing by the DNC and finally confiscate that server they rigged the election with. Then straight to the Spy Museum. We can egg the Embassy Row home of Crooked Hillary and bring a bullhorn to the Kalorama house of Jeff Bezos, who owns the Amazon Washington Post.

2pm We go to the Federal Election Commission, so Putin can get an update on how his scheme to hijack the midterms is going.

3pm I take Putin to Langley for a tour of the CIA. Surely there will be some intelligence officers he needs to interrogate about the Mueller Witch Hunt.

4pm Go over to the RNC, I mean the NRA headquarters in Virginia. We can have those tasty redheaded Russian spies meet us there for some target practice.

5pm Serve Putin vodka on an aquamarine velvet chaise at the Trump hotel so that he can see for himself when Russia funnels secret cash into my hotels and golf courses, it’s money well-laundered.

7.30pm Take Air Force One to Bullhead City, Arizona, for a rally. I can welcome bare-chested Putin onstage and thank him for helping me beat Crooked Hillary – not that I needed any help! I had the biggest Electoral College win since Lincoln!! Vlad and I can team up to trash John McCain on his sickbed. How dare McCain say I am a naive egotist with a sympathy for autocrats who abjectly abased myself before a tyrant and failed to defend American values? I’m hardly naive!

11.30pm (Mountain People’s Time): Call Hannity on the flight back to Washington for a joint interview about our record-breaking crowds in Bullhead. This day will be so tremendous, Vlad will want to do it again – after he fixes the 2020 election.